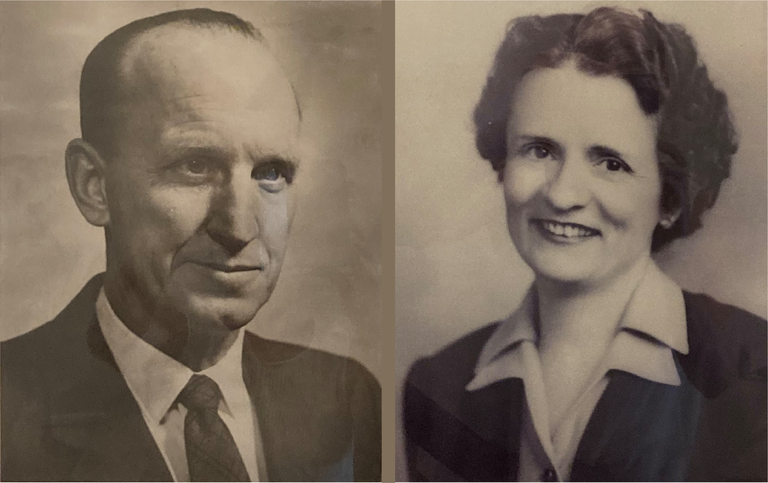 The Obermann Center is named in honor of University of Iowa Professor Emeritus C. Esco Obermann and his wife Avalon L. Obermann for their generous financial commitments, their tremendous enthusiasm for interdisciplinary endeavors, and their many years of loyalty and devotion to the University of Iowa.

In the mid-seventies, the Obermanns, President Sandy Boyd, and Vice President D. C. Spriestersbach discussed the idea of an institute that would encourage the exchange of ideas among researchers from many disciplines and institutions.

That idea was formalized as University House in 1978 and then, nurtured by generous funding from Esco and Avalon and from the Vice President for Research, grew into the University of Iowa Center for Advanced Studies in 1990. In 1993, with great ceremony and celebration, it was renamed the C. Esco and Avalon L. Obermann Center for Advanced Studies. 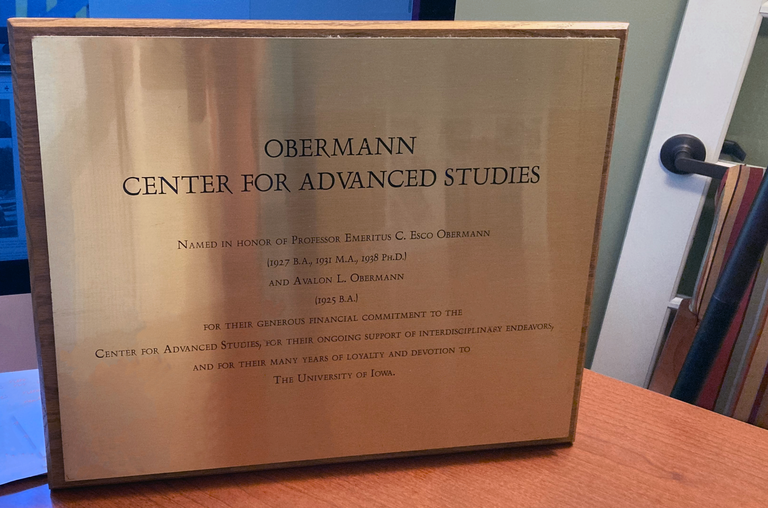 The Obermann Center for Advanced Studies is named in honor of University of Iowa Professor Emeritus C. Esco Obermann and his wife Avalon L. Obermann for their generous financial commitments, their tremendous enthusiasm for interdisciplinary endeavors, and their many years of loyalty and devotion to The University of Iowa.

Esco Obermann was born July 31, 1904, in Yarmouth, Iowa. Avalon Florence Law was born June 24, 1904, in Texas but grew up in Washington, Iowa. The couple met in the fall of 1922 after each of them had begun classes at The University of Iowa. Years later, Esco described their meeting: “On the day that [I] met her, [I] saw so much beauty and warmth and intelligence and character in her, it is reported that [I] confided to [my] college roommate, ‘I am going to marry that girl.’”

The two were soon engaged, but due to the Depression they weren’t able to marry until 1929. Avalon had graduated from The University of Iowa in 1925 and taught high school music for several years. Esco received three degrees from The University of Iowa: a B.A. in political science in 1926, an M.Ed. in 1931, and a Ph.D. in clinical psychology and speech pathology in 1938. While a student at Iowa, Dr. Obermann was an outstanding gymnast and a member of the Hawkeye yearbook staff.

Dr. Obermann’s career as a psychologist and rehabilitation counselor began in 1928, when he was named chief of vocational education for the Rochester, Minnesota, schools. After earning his doctoral degree and holding a research fellowship at The University of Iowa from 1938 to 1940, he served in the U.S. Air Force from 1940 to 1946. He then joined the U.S. Veterans Administration in Minneapolis and served as director of rehabilitation from 1946 to 1960. He directed the St. Paul Rehabilitation Center from 1960 to 1963; worked for two years as an associate professor of Psychology at Iowa Wesleyan College in Mt. Pleasant; and was named associate professor in Counselor Education at The University of Iowa in 1968. He left the UI in 1970 to become a rehabilitation consultant in Wisconsin, and in 1977 became an adjunct professor for Mankato State University. The couple had a country home in Afton, Minnesota in their latter years. Avalon passed away in 1992, and Dr. Obermann remained active in consulting until his death in 1999.

An active alumnus, Obermann chaired his Class Gift committee and became a Presidents Club member in 1975. In the mid-seventies, he and President Sandy Boyd and Vice President D. C. Spriestersbach discussed the idea of an institute that would encourage the exchange of ideas among researchers from many disciplines and institutions. That idea was formalized as University House in 1978 and then, nurtured by generous funding from Esco and Avalon Obermann (who donated part of the sale of their estate) and from the Vice President for Research, grew into The University of Iowa Center for Advanced Studies in 1990. In 1993, with great ceremony and celebration, it was renamed the C. Esco and Avalon L. Obermann Center for Advanced Studies.

Esco’s financial commitment to the Obermann Center was extraordinary but no more so than his intellectual commitment to interdisciplinary and collaborative scholarship. Esco was able to see his dream realized in the creation of the Obermann Center and then, just recently, in the Provost’s identifying interdisciplinary research as a major UI strategic goal. 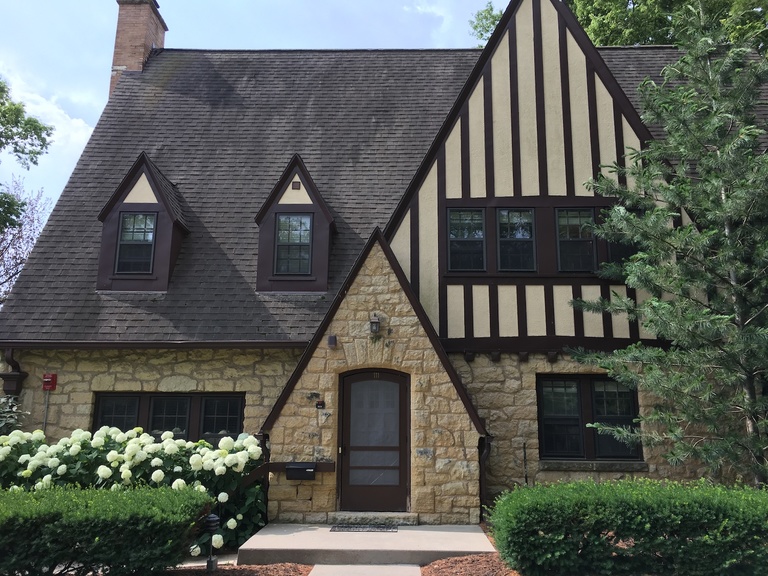 Craft Coast (1816–1864) and his wife Nancy Regan purchase the plot of land after arriving from Ohio in 1854. They build a house at 530 N. Clinton (corner of Clinton and Church Streets) and a carriage house at what later becomes 111 Church St. Their daughter, Mary Elizabeth, would go on to marry the famous portraitist George Henry Yewell, whose papers are held by the UI Libraries. 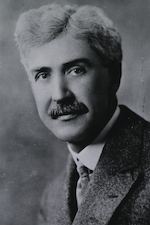 Bird Thomas Baldwin (right) commissions Cedar Rapids architect Mark Anthony to build a home for himself, his children, and his then-fiancée on the site of the Coasts’ carriage house. Baldwin (1875–1928) was Research Professor of Educational Psychology at the UI from 1917 to 1928 and Founding Director of the University of Iowa Child Welfare Research Station, the first research institute in its field in the world. As an occupational therapist, he was devoted to holistic patient care. He was a major in the sanitary corps of the army in 1918–19 and was director of the rehabilitation of disabled soldiers in the Walter Reed General Hospital. As director of the ICWRS, Baldwin won a series a of grants, including from the Laura Spelman Rockefeller Memorial, with which he led the Station to national eminence, integrating the science of child study and the applied social technology of parent education. His wife Claudia died of illness in 1925, leaving their three children in his care.

Baldwin himself died on May 12, 1928 at age 53—a few days before he was to be remarried. (He’d cut himself while shaving on a train and died of a bacterial infection.) The house was still under construction. Bird and his children had been living at 124 E. Church St. Beth Wellman (1895–1952), Baldwin’s fiancée and an ICWRS researcher, author, and UI professor, settled Baldwin’s estate, foreclosed on the property, and raised his three children as her own.

Mark Anthony (the architect) was a strong proponent of period revival-style architecture, hence the half-timbered, half-stone exterior and steeply pitched gable roof of the house at 111 Church St. Originally from Chicago, Anthony was sent to Cedar Rapids in 1918 to work on engineering projects for Douglas Starch Works and Quaker Oats and went on to become a prominent church and home architect. According to the Iowa State Historical Department’s Iowa Site Inventory, the house at 111 Church St. is one of only a few homes in the district with an identified architect.

Pi Mu purchases and completes the house. We are unsure if this reference is to Pi Mu Epsilon, Alpha Pi Mu, or a different organization.

Baldwin and Georgia Maxwell purchase the house and convert it to a private residence. Baldwin Maxwell (1893–1988) was the chair of the UI English Department from 1926 to 1961—a remarkable 35 years. He was a scholar of Renaissance drama and oversaw the English department through a period of major growth that included the founding of the Writers’ Workshop. He was also a longtime editor of Philological Quarterly and a WWI veteran.

Georgiana ("Georgia") Smith Maxwell (1896–2000), a native of Mt. Pleasant, Iowa, was considered one of the most influential hostesses in Iowa City. She was a founding member of the Pan-American League of Iowa City, whose mission was "to broaden the mutual appreciation of the peoples of the Western Hemisphere," and was a longtime member of Iowa City’s Raphael Club, serving as both vice president and historian. The Raphael Club was founded in 1884 as an all-female social/literary/artistic club that studied copies of Raphael's drawings and other works of art owned by founder Mrs. Mark Ranney. The members would each research and prepare papers on the different subjects, then present them to each other.

The Maxwells were also active in a number of social organizations, including Hiking Club and Dancing Club, and threw numerous memorable parties in their home, propitiously situated across the street from the University President’s house.

The Maxwells’ heirs sell the property to the University of Iowa. Renovations begin.

The house serves as the home of former UI Provost and historian Michael J. Hogan and his wife. In 2005, the Hogans move to a new home north of Iowa City, and the house at 111 Church St. is unoccupied until 2006.

The Office of the Provost makes house available to visiting writers, graduate students across all writing disciplines, and creative writing undergraduates as a mixed-use living, working, socializing, and learning space called “The Writers’ House.” Four postgraduate writing fellows move in.

The Obermann Center for Advanced Studies moves from its longtime home on the Oakdale Campus north of Iowa City to 111 Church St.

Today, the building includes many of the charms that the Maxwells surely enjoyed, including two fireplaces, sloped ceilings, a screened porch, and a library with floor-to-ceiling bookshelves. More recent amenities include a full kitchen, complete with dishwasher and microwave, rain garden, a backyard patio, and house-wide wi-fi. There is a wheelchair accessible entrance on the west side of the building and three single-user, gender-inclusive restrooms in the house—one on the first floor and two on the second.

In addition to the offices available each semester to seven Fellows-in-Residence, the Center has a library and conference room where other Obermann Scholars, including members of our Working Groups and Interdisciplinary Research Grant groups, meet. These rooms can be reserved by Obermann-related groups and friends of the Center. To reserve these rooms, please contact Erin Hackathorn.