The culture and history of Latinos in the Midwest is an increasingly significant topic for college courses in Latino/a Studies. Numbers alone indicate that this regional emphasis is critical. Between 2000 and 2010, the Latino population increased by 44% across the country and by more than 73% in many Midwestern states. Yet, there is no teachable anthology for undergraduate classes.

Claire Fox (English and Spanish & Portuguese, CLAS) and Omar Valerio-Jiménez (History, CLAS) are filling this void with The Latino Midwest Reader, an anthology and web platform that will include original essays, lesson plans, oral histories, photographs, and maps. In early June, the pair led the 2013 Obermann Summer Seminar, gathering fourteen distinguished scholars in Latino/a Studies to the University of Iowa. 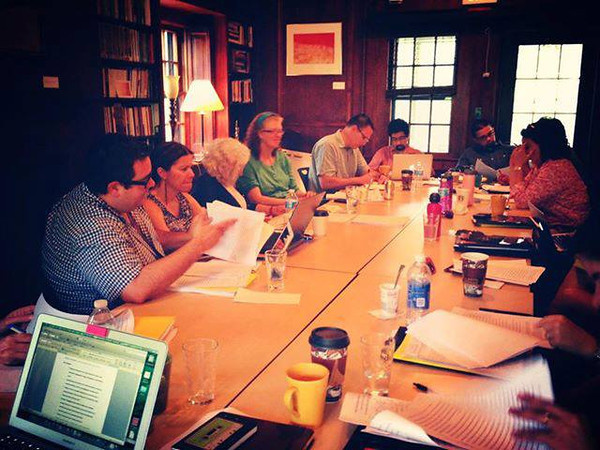 Each participant arrived with a draft of an essay already in hand. They spent the week commenting on each other’s work, as well as discussing the development of the ambitious collection of essays on topics ranging from urban labor history to rural place-making, social movements, religion, literature, performance, and popular culture.

The anthology will feature the historically rich contributions of Latina/os to the region. Valerio-Jiménez points out that though many people think of Latino/a  as relative newcomers, they actually have deep roots. “Mexicans began harvesting crops and maintaining railroads throughout the Midwest in the late 19th century,” he says. “By the 1940s, Puerto Ricans had joined Mexicans as laborers in agriculture, manufacturing, meatpacking, and domestic service.”

Leaders in the Field

Many of the seminar participants were in Iowa City in October 2012 for the Obermann-International Programs Humanities Symposium, The Latino Midwest, also directed by Fox and Valerio-Jiménez, along with Santiago Vaquera-Vásquez (then of UI Spanish & Portuguese and now at the University of New Mexico). The group represents many leaders in the field and the region, including:

·      María Cotera, associate professor of American Culture and Women’s Studies and former director of the Latina/o Studies Program at the University of Michigan

·      Louis G. Mendoza, associate professor and former chair of Chicano & Latino Studies and associate vice provost in the Office for Equity & Diversity at the University of Minnesota

·      Amelia María de la Luz Montes, associate professor of English and Ethnic Studies and Director of the Institute of Ethnic Studies at the University of Nebraska, Lincoln.

“The anthology represents scholars from Big Ten Latino Studies departments and programs—extremely necessary and important centers that are publishing cutting-edge research affecting the current and future social, political, and cultural fabric of the United States and its transnational connections,” says Montes.

She added that the seminar stimulated everyone’s scholarship: “To have us all together in one room created an intellectual power house. A memorable week indeed!”

As faculty members at the only Committee on Institutional Cooperation (CIC) collective of research universities without a Latina/o Studies program, Fox and Valerio-Jiménez were buoyed by their colleagues’ enthusiasm for the inception of a program at the University of Iowa. “They gave very clear, strong reasons for the value of such a program,” says Fox, citing several: the UI already has very talented people working across campus in this area; a Latina/o Studies would help the UI to retain both faculty and students; and Latina/os are vital to the future of our region, including our educational system. She also noted that together the Humanities Symposium and the Summer Seminar have inspired this growing group of scholars to initiate a CIC working group on Latina/o Studies. 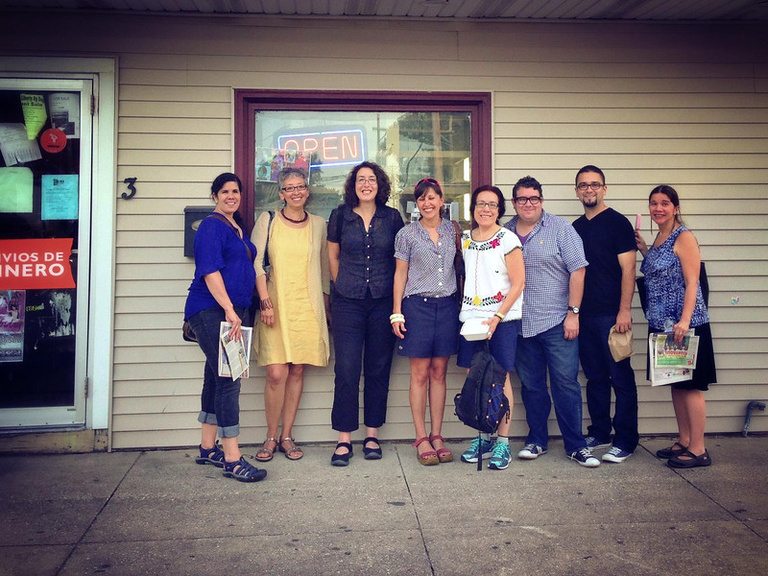 During the week, seminar participants took two field trips, including one to the Iowa Women’s Archives, where they were impressed by the depth of the collection. Fellow UI participant Carolyn Colvin (Teaching & Learning, College of Education), who has worked with partners in West Liberty for more than a decade, also led a tour of the small town where the group learned about the local schools and public library, the turkey processing plant, a mobile home park where many newer immigrants live, and a subdivision where new homes mark the growing economic success of this Midwestern community.

“It was an eye-opening trip, especially for some of the more urban members of the group who have spent little time in rural areas,” says Fox, who along with her co-editors, Valerio-Jiménez and Vaquera-Vásquez, plans to have the manuscript completed this winter. The trips served to underline the rich contributions that Latino Iowans are making to the state and the region. Their challenges and contributions to Midwestern culture will be richly documented in the exciting anthology and digital project being created by this inspiring group of scholars.