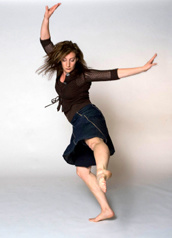 Jennifer Kayle (Dance, CLAS; pictured left) has spent the past few months immersed in books like Diane Ackerman’s The Human Age: The World Shaped by Us and Elizabeth Kolbert’s The Sixth Extinction: An Unnatural History, as well as works about how complex science can be effectively communicated to a broader public. This research has been the anchor for a new dance that she has choreographed for Energy Cultures in the Age of the Anthropocene, the 2015 Obermann Humanities Symposium.

Sitting on the Optimism/Pessimism Fence

Awash in statistics and stories about the planet’s cataclysmic current direction, Kayle’s personal goal was to remain curious and even optimistic. “The research materials led me to play both sides of the optimism/pessimism fence,” Kayle says. “For example, my cynicism was utterly justified by Merchants of Doubt: How a Handful of Scientists Obscured the Truth on Issues from Tobacco Smoke to Global Warming [Naomi Oreskes and Erik M. Conway], and by Rob Nixon’s Slow Violence and the Environmentalism of the Poor. On the other hand, my hopefulness and activism was utterly justified by learning about the healing effects of permaculture, and by stalking activist and eco-feminist Vandana Shiva [who will be speaking at the Englert Theatre on March 10] via her many lectures on the web, presentations that include multiple success stories.”

The results of Kayle’s research will be found on the stage of the Englert Theatre at 5:15 pm on March 7, as the finale of the symposium. Smoke-Screen: This and Other Warnings features a cast of eight UI dancers, an original score by UI Music PhD student Jason Palamara, and video by UI dance graduate student Tori Lawrence.

During the 30-minute performance, the dancers will enact some of the Anthropocene themes from Kayle’s readings. They will also be dancing snippets from earlier of her dances, an intentional way “to rescue and up-cycle various concepts from the landfill of previous choreography.” In addition, all of the dancers’ costumes are recycled, remade, or borrowed. Some of the music created by Palamara will be motion triggered during the performance, created in partnership between human movement and a computer program. And a bicycle generator on stage will produce energy.

Tyler Nemmers, a dual major in dance and engineering, created the bike. Nemmers says that this performance is one of the first times he has been able to intertwine his two interests. He appreciates how the two fields together provide both a qualitative understanding of a subject (dance) and a quantitative understanding (engineering). Each is valid, he notes, but when combined they offer a much deeper insight.

“I have had classes that have thoroughly explored global warming, its causes and effects,” says Nemmers, “but when I wrapped myself in a blanket of plastic for this production and felt the rising levels of carbon dioxide as I breathed in and out, accompanied by the increasing temperature, I truly understood.”

Smoke-Screen’s 5:15 pm performance is set to follow the 3:30 pm keynote talk by Sandra Steingraber, a biologist and author who writes for general audiences about the intricacies of environmental destruction, human health, and scientific research. She is best known for her books Raising Elijah and Living Downstream, both of which deal with the very human and personal effects of our interaction with an increasingly changed environment.

The combination—on one stage—of Steingraber’s poetic prose and Kayle’s dance are likely to prove to be just the kind of effective science-art pairing which Nemmers has found so compelling.