This fall, University of Iowa students are discovering the charms of an aged knight-errant, his earthy sidekick, and a cast of colorful characters. In celebration of the 400th anniversary of the publication of Don Quixote, Ana Rodríguez-Rodríguez and Denise Filios, professors in Spanish and Portuguese, are co-directing the Obermann–International Programs Humanities Symposium, “Parody, Plagiarism, Patrimony: Don Quixote in the Age of Electronic Reproduction” (October 22–24, 2015).

In addition to organizing the three-day event, both professors are teaching courses devoted to the book, one of the most influential works of literature. Rodríguez has been teaching “Don Quixote: Contemporary Readings and Artistic Viewpoints,” since 2009. Although she usually offers it in Spanish, this year she is teaching it as an honors seminar in English. The class culminates with students creating an artistic interpretation of the book, and Rodríguez’s office in Philips Hall is filled with past projects, including a stunning piece of book art, a board game, and paintings.

The familiarity students bring to the novel varies wildly, but everyone finds a point of entry. Melissa Trepa, a freshman from Bettendorf, Iowa, had never heard of Don Quixote, but she welcomed the opportunity to focus on a single work over the course of a semester. The historical and cultural grounding in Cervantes’s era that Rodríguez provided during the first weeks of class inspired Trepa’s appreciation of how his work comments on the time period, often in ingenious and even sly ways.

Trepa also finds a bit of herself in the comical knight. “I really enjoy how Don Quixote lives in a fantasy world. I can relate, because I daydream a lot,” she admits with a laugh.

Rodríguez has found multiple entrées into the text for contemporary college-age readers. Although it appears to be an imposing book—an average translation of the novel, which was first published in two parts, runs close to a thousand pages—she says that students are moved by its themes of race, religion, power, gender, and friendship.

“To me, it’s a book about how human beings relate to each other and how they solve problems in relationship,” says Rodríguez. “Students are thinking about that all of the time.”

Filios, who is currently teaching a course about adaptations of Don Quixote, subtitled “Staging Don Quixote’s World,” concurs about the book’s relevancy. “The book’s social landscape is so diverse. It’s not unlike college. Many students have never been in such a diverse setting as they experience their first year of college.” She adds that the book provides a model of how to live a fearless and curious life.

In addition to being a forerunner of many great literary texts—Don Quixote is directly referenced and its influence can be seen in works such as The Three Musketeers and Huckleberry Finn—it is also essentially a road trip. As they travel, Don Quixote and his squire, Sancho Panza, encounter a cast of characters, each of whom tells his or her story.

In this way, the book becomes a lesson in storytelling. “You don’t even notice he’s doing it,” says Rodríguez, “but Cervantes is giving a workshop about how to write and how to read. Throughout the book, so many characters have to tell their stories and shape their personal narratives, and each does so in a unique way. There is also an entire episode in which the narrator questions who can tell a story.”

The book gives voice to the voiceless, shining a spotlight on characters such as women reclaiming their freedom, exiles trying to return to their land, and travelers who encounter new realities that transform them forever. Emily Wallace, a senior from Bettendorf who is currently enrolled in Filios’s class, cites Marcela as a favorite character: “She goes against the typical standard of women in this time by defying her uncle’s wishes for her to get married. She represents a genuine woman who has her own ideas.”

In organizing the symposium, Rodríguez and Filios were interested in why this book is such a touchstone. “Even if people haven’t read it,” says Filios, “they likely understand a Don Quixote allusion. Why is that?” 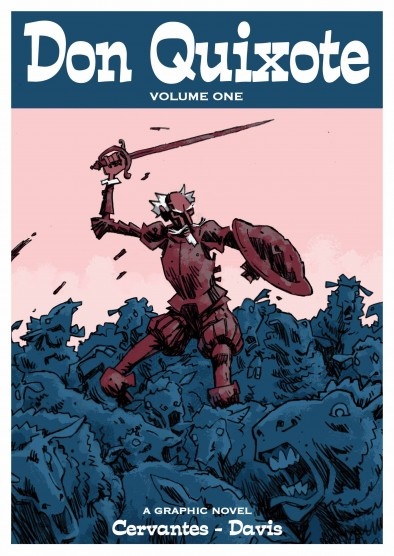 Like other canonical stories, such as Romeo and Juliet, Don Quixote has long been ripe for various kinds of reworking. As the title of the conference suggests, this has taken many forms, including a so-called sequel to the first half of Cervantes’s story published by a rival under the pseudonym Alonso Fernández de Avellaneda. In her class, Filios and her students are studying film adaptations, contemporary theatre, including a play written by local playwright Ana Merino, and a comic book version by the author Rob Davis.

Each has its own twist that represents differing cultures, time periods, and authorial attitudes. In the Davis comic, for example, the story ends with a female character telling Don Quixote, essentially, that everyone is just laughing at him. This cruel revelation sends the old knight home to die.

Rodríguez and Filios are excited that the keynote lecturers for the symposium are taking the theme of reproduction to heart. Jenaro Taléns, a celebrated Spanish essayist, poet, critic, and translator, is speaking about a recent film adaptation, while David Castillo, a professor at SUNY–Buffalo, will discuss the so-called digital Baroque and how paradigms from the seventeenth century can be applied to our current situation. 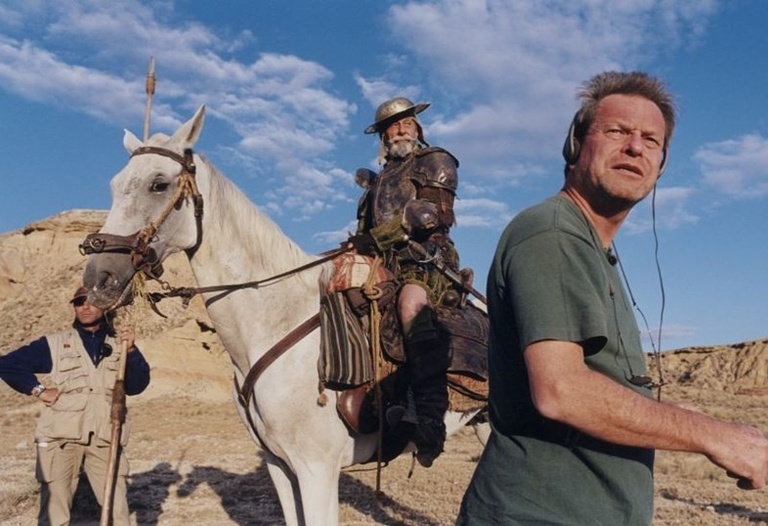 One famous contemporary adaptation of Cervantes’s tale that has yet to be fully realized is a film by Terry Gilliam, The Man Who Killed Don Quixote. The project, which the Monty Python founder and creator of films such as Brazil and The Adventures of Baron Munchausen, has been famously derailed. There have been seven unsuccessful attempts to produce the film, beginning in 1998. The story of the initial film, which was to star Johnny Depp, has now been rewritten to pay homage to its difficult production, playing with the same metafiction that is part of Cervantes’s book.

When planning the symposium, Filios and Rodríguez thought having Gilliam speak would be thrilling, but a total shot in the dark. Learning that Gilliam would be on a book tour this fall to promote a new memoir, and with news of the film’s release by Amazon next spring, FilmScene director Joe Tiefenthaler worked with the University of Iowa Lecture Committee to extend a speaking invitation to the native Minnesotan. Gilliam will speak on Friday, October 23 at 7:30 pm in the IMU Ballroom.

In addition to this lecture, other arts programming surrounding the symposium includes: 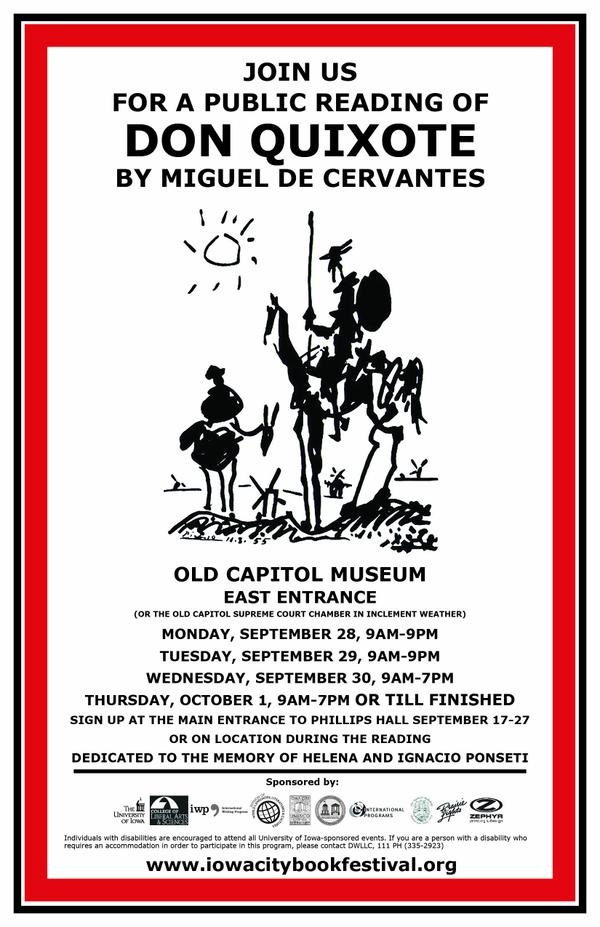 You can enjoy your own few minutes of literary fame by participating in a four-day reading of the full text of the book on the steps of Old Capitol, Monday, September 28 through Thursday, October 1. To sign up to read a passage aloud, contact Anna Barker (anna-barker@uiowa.edu). Barker, who teaches Russian literature, organizes the public reading of a great work of literature each year in conjunction with the Iowa City Book Festival. She likes to encourage the public to celebrate significant publication dates, so the 400th anniversary of Don Quixote caught her attention. Her planning grew beyond the reading, as she connected with UI Symphony Orchestra conductor William LaRue Jones, the International Writing Program, and others to build a series of community arts programming dedicated to Quixote.

“I don’t believe that great works of literature exist in isolation,” says Barker. “Every literary masterpiece is a bottleneck: so much energy goes into producing it, and then there’s a monumental outflow of ideas that result from it. This one book crystallizes the creative process because it’s a book of metafiction, conscious of itself as a book and an event. It became a model for so many other pieces of art and how an artist is in dialogue with a work.” 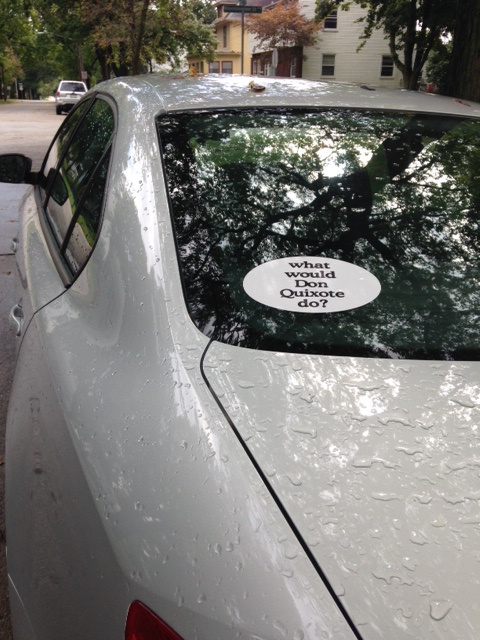 Locally, one of the latest “outflows” of Don Quixote is the upcoming symposium. In some small way, this symposium began as a trickle of the imagination on a summer day in Galicia, Spain, when a ten-year-old girl picked up an old copy of Cervantes’s classic and began to read.

“I was spending a boring summer at home in northwestern Spain,” recalls Rodríguez. “The reading was hard in the beginning, but it didn’t take long before I got into the adventure of this guy doing these crazy things.” She kept reading, discovering in the book a window onto the larger world. In time, that book informed life decisions as she considered what to study, first in college and then in graduate school. Today, Rodríguez even has a bumper sticker on her car that asks, “What would Don Quixote do?”

“I am convinced that reading Don Quixote changed my life,” she declares. “It is why I do what I do.” Now, the entire community has an opportunity to share in her enthusiasm for this singular tale.