Beyond the Shiny New Toy—Next Frontier for Digital Humanities

Last summer, a group of three scholars commandeered the Obermann Center attic for a month with the goal of pushing their digital humanities (DH) project into a new phase. The team of Blaine Greteman (English, University of Iowa), James Lee (English, Grinnell College), and David Eichmann (School of Library and Information Science, University of Iowa) worked to link two separate database websites. One captures the full texts of 25,000 early modern books; the other includes metadata about the makers and sellers of nearly 500,000 books from a 300-year period.

The group was the first recipient of an Iowa Digital Bridges Collaborative Grant, part of the Digital Bridges for Humanistic Inquiry. This multiyear experiment supports a variety of collaborative practices in the humanities and is funded by the Andrew W. Mellon Foundation. The initiative offers faculty members at Grinnell College and the University of Iowa opportunities to work together from 2015 through 2018.

At the heart of their project, “Linked Reading: A New Scalable Model for the Digital Humanities,” was a desire to see how the two datasets could be combined to answer a host of questions about the history of published literary texts, including the impact of those who printed, sold, and circulated these materials. As both Greteman and Lee are Shakespeare scholars, they chose Othello as a test case. Could they garner a new understanding of the play by unifying their datasets, and what technical bumps would they hit along the way?

The loftier goal of the project was the advancement of a field that is arguably still in a very early phase. The three scholars believe that having multiple datasets that can talk to one another and be simultaneously cross-referenced will open new doors for scholars studying literatures of the past as well as for digital humanists.

“For a long time, DH has been viewed as a shiny new toy,” says Lee. “Just saying ‘isn’t it cool’ isn’t sufficient. We want to move beyond that.”

Greteman and Lee met three years ago when both were speakers at the Obermann Center–sponsored Iowa Humanities Festival in Des Moines. As they compared notes, they became interested in how their separate digital projects might interact.

In their scope, the projects rely on very different scales. Greteman’s Shakeosphere, created with Eichmann (left), includes existing author, publisher, bookseller, and printer information for essentially all literature printed in English between 1473 and 1800—a total of 487,000 texts. Lee’s Global Renaissance project includes full-text transcripts of 25,000 books drawn from the Early English Books Online / Text Creation partnership. Shakeosphere focuses on people, allowing researchers to discover who was responsible for books; Global Renaissance focuses on the topics and themes of those books.

On the new site, “Linked Reading: Big Data Histories,” (link no longer active) users can move back and forth between the data in the two sites and use analytical tools developed at both Grinnell and Iowa. If a user of the Shakeosphere site is interested in a particular publisher, for example, then he or she can reference that person against the topics from Lee’s site. To use the example of Othello, scholars might ask a range of questions. What other kinds of books did the first-edition publisher of the play publish? Military books? Religious treatises? Alternatively, a researcher who uses Global Renaissance to discover books about “race” can navigate to Shakeosphere to discover all the authors, publishers, and booksellers who produced works on that topic. 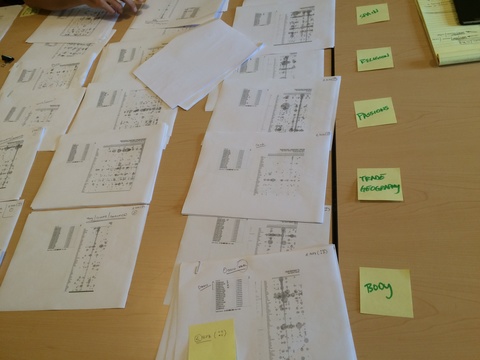 Leveraging Many Tools Toward One Text

“‘Distant Reading’ is this catch phrase that means you have a digital approach to a large number of texts,” says Greteman. “You take more texts than a person can read and run digital analysis of them. But Distant Readings tend to use only one approach or tool. We really want to leverage many different tools in order to look at the same text from multiple perspectives.”

During their time together last summer, Eichmann, Lee, and a group of undergraduates from Grinnell worked on the coding necessary for these complex operations. At the same time, Greteman and Lee did a lot of pencil and paper work (shown here), combing through the data in a very basic way in order to clean it up. A quick example suggests the challenges they faced. The publisher of Othello, Nicholas Oakes, appeared in the database in a dozen different ways, for example. Were N. Oaks, Nicklaus Oaks, Nicholas Oakes the same person? If so, how could the materials be coded to tie all these variations—which scholars may never have connected—to a single entry? This kind of “disambiguation,” which makes the tool much more potent and effective by allowing users to produce clearer visualizations of information, is now being done through crowd-sourcing, thanks to a tool Eichmann developed during the Obermann residency. For the Othello project, though, the two Shakespeare scholars untangled the data on their own, reminding all involved of the powerful interplay of human and machine intelligence. 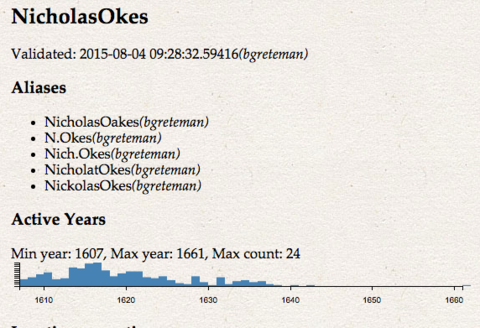 ​Eichmann started working with Greteman on Shakeosphere in 2013, applying principles and coding from a project he created for the University of Iowa College of Medicine that helps to identify researchers working on similar topics. Eichmann’s project, CTSAsearch [link removed], includes data from 65 different universities and includes up to 300,000 faculty profiles that can be cross-referenced to show who has published or presented together. With just a few clicks, relationships become visually apparent.

Although Shakeosphere was built for a novice user, Lee’s site is intended for a user with more developed analytic skills. “Part of the challenge,” says Eichmann of the new project, “is to help people reach into more complex informational sets and still make sense of them.”

Lee, who trained in molecular biology and genetics research before moving into English, says that his experience in science suggests that multiple datasets are needed to prove claims. “But a lot of DH scholars have pet data they go to repeatedly,” he says. “They’re using one tool, one lens to analyze everything.”

The Moor of Venice Provides a Test Case

Othello offered a case study, an opportunity for the scholars to flesh out the methods of the two datasets.

“If we write an article on the Moor in the Renaissance and if we analyze the full text data that I have,” says Lee, describing their thought process, “does that confirm or deny or complicate traditional scholarship? And if we add Blaine’s does it confirm, deny, or complicate things?”

And to what end? In this case of Othello, Lee comments that scholars make claims about race in the play, and yet they don’t analyze every book in the Renaissance to see if their readings are plausible given the broader context of the period. The dual datasets, however, help to put humanistic scholarly speculations in conversation with massive datasets.

Adding even more datasets to the mix is the next stage of the project, The Map of Early Modern London. This project at the University of Victoria will locate booksellers and publishers on a map, adding another layer of visual connections.

In the meantime, Eichmann is using some of the coding he developed for this project to enhance his work with the College of Medicine. A talk he gave on the project last summer in Sydney, Australia, was so well received that he is now working on the final phase of a proposal that includes Cornell University, Stanford University, and Harvard University. And one of his colleagues in the School of Library and Information Science is using Eichmann’s code to develop a temporal and spatial map of independent filmmakers from the 1970s.

Also benefiting are the students Lee brought on to the project last summer—three humanities majors with some math or technology background and four students with double majors in computer science and the humanities. Lee notes that while Grinnell has encouraged many of its students to seek out double majors in disparate areas, faculty members and advisors have not yet figured out how to help students make sense of their divergent interests. Working on a team that relies on students’ education in both science and the humanities, the faculty as well as the students themselves discover the value of cross-disciplinary majors on a daily basis.

Collaboration Itself Offers the Most Illuminating Lesson

As someone who was an Intel Science competition finalist as a high school student, but who burnt out quickly in the intensely competitive world of lab research, Lee is excited to discover new ways to help his students thread their educational experiences together. The linked reading project, he says, is “based on questions we’re asking in the humanities, but the students are using these other skills. It helped them to synthesize their skills.”

He notes that other students he’s brought into his Global Renaissance web project have gone on to work at Google, Microsoft, and even, in one case, to start a beta science firm. They didn’t learn the necessary language analysis skills they needed for those jobs via computer science, he says; “they got them in the humanities.”

The Obermann Center fellows have written a scholarly paper based on their work, which they have submitted for publication. Meanwhile, all three scholars are continuing to update and refine the website, which will soon also include contributions from undergraduates at Stanford University, where Greteman is on fellowship. “Already, the most exciting thing for me is seeing students and faculty from all these very different campuses come together in this work,” says Greteman. “We’re learning a lot about literary history, but I think for both our students and ourselves the most illuminating lessons are about collaboration itself.”