Thousands of years before the advent of print, texts were recorded in manuscript form--written out by hand on papyrus, parchment, paper, silk, bamboo, or other materials. Scholars involved in the 2016-17 Mellon Sawyer Seminar at the University of Iowa are renewing their examination of these early texts, asking such questions as: How were these texts produced, transmitted and exchanged within and between different cultural groups? How did the material aspects of these texts foster or impede their development, dissemination and survival?

The Andrew W. Mellon Sawyer Seminar, Cultural and Textual Exchanges: The Manuscript Across Premodern Eurasia, is an interdisciplinary collaboration dedicated to mapping cultural exchanges across Eurasia from roughly 400-1450 CE, by focusing on the development, distribution and sharing of manuscript technologies. The prestigious seminar, organized by three UI faculty members Paul Dilley (Classics and Religious Studies, CLAS), Katherine Tachau (History, CLAS), and Tim Barrett (Center for the Book, Graduate College), brings to campus an international roster of scholars and book conservators to share their expertise in the religious, cultural, material, and textual traditions of medieval Eurasia. Visiting scholars have a range of specialized skills in ancient languages and literatures (Latin, Hebrew, Aramaic, Middle Persian, Coptic, Pali, and Middle Chinese, to name a few), and many are developing cutting-edge methodologies to analyze and interpret premodern texts in new ways.

Brent Seales and Vito Mocella, who will visit January 20, 2017, have developed a ground-breaking technology that virtually ‘unwraps’ fragile, ancient scrolls. This technology, recently featured in a New York Times article, is a non-destructive technique using x-ray phase contrast tomography to digitally reveal previously unreadable, c. 2,000-year old texts such as those in the fragile En-Gedi scroll or Herculaneum papyri charred in the eruption of Mount Vesuvius.

“This is a spectacular example of interdisciplinary work involving humanities researchers, engineers, computer scientists, and physicists and exemplifies how the ‘digital humanities’ can make possible transformative research that for centuries was impossible,” says Tachau, noting the remarkable impact these collaborative efforts in the digital humanities will have.

Beyond the impressive lecture series, the seminar will produce an extensive digital mapping project, which includes a pioneering timeline and interactive map tracking the creation and spread of various manuscript formats, materials, and scripts across premodern Eurasia. “Our team will translate relevant ancient texts and offer images of surviving manuscripts when available, with the goal of creating a lasting resource for researchers, educators at all levels, and the broader public,” says Dilley, who is heading up the digital mapping project.

The seminar also hosts post-lecture discussion sessions and hands-on workshops for participants, including invited UI and Grinnell faculty and graduate students). Participants get direct interaction with medieval manuscript techniques and materials in order to really understand how texts were created and used in the premodern period. 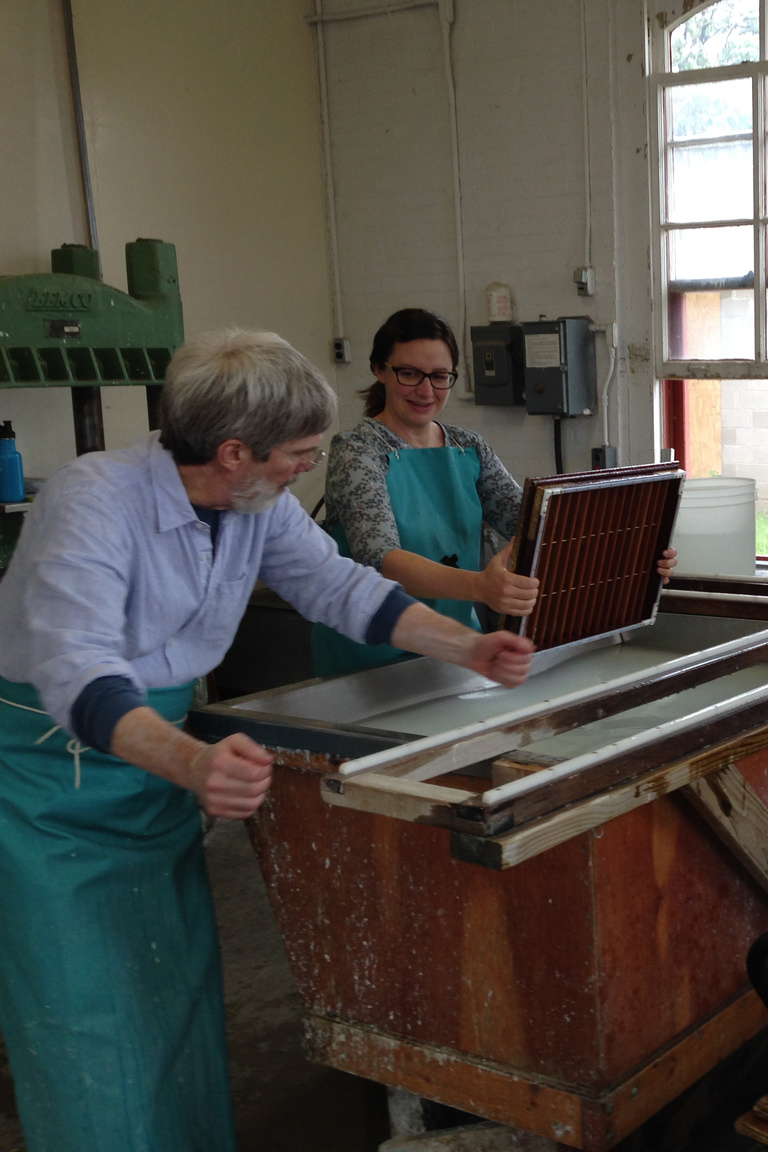 The first workshop was held in September at the Oakdale Papermaking Facility, where participants got elbow deep in paper pulp making Japanese, Nepalese and western sheets of paper. They, made several book structures, wrote like a medieval scribe using a quill/reed pen and iron gall ink, and made goatskin parchment using techniques that have not changed for more than two millennia.

The direct interaction with medieval materials and techniques was eye-opening for this group of scholars and makers. Morten Schlütter, Associate Professor of Chinese Religion in the UI Department of Religious Studies, says that this experience has given him “a new appreciation of the complexity of manuscript production, and of the ways in which a close examination of the physicality of a manuscript can give us clues to a better understanding of the text it carries.”

On Friday November 4 in 347 IMU Minnesota Room, the seminar hosts a double public lecture by Michael Friedrich and Zsuzsanna Gulacsi. Friedrich, of the Department of Chinese Language and Culture at the Universität Hamburg and Director of the Centre for the Study of Manuscript Cultures, will discuss “Ancient and Medieval Chinese Manuscripts” and their relevance to cultural and intellectual history and the study of ancient manuscripts. Gulacsi, from the Department of Comparative Cultural Studies at Northern Arizona University, will present a lecture on “From Picture Books to Illuminated Manuscripts: The Formation of Manichaean Book Culture in its Eurasian Context” focusing on the manuscript culture surrounding 3rd-century gnostic prophet and heretic Mani.

For a full schedule of 2016-17 public lectures, recordings of past lectures, bios, and a blog see:  http://eurasianmss.lib.uiowa.edu/. And follow the seminar on Twitter! @EurasianMssIowa.