A Symposium Bears Fruit: New book and an inter-institutional grant the latest results of The Latino Midwest

Convening the right group of people at the right time can create not just a ripple effect but a tidal wave of creative, collaborative products. Claire Fox (English and Spanish & Portuguese, CLAS) has seen this firsthand. Since she co-directed The Latino Midwest, the 2012–13 Obermann Humanities Symposium, a new University of Iowa program has come into being, a related textbook is soon to be published, and year-long project was just awarded funding by the Andrew W. Mellon Foundation.

The symposium convened nineteen prominent scholars, activists, artists, and writers who work on or in the Latino Midwest. While most studies of Latinos focus on the coasts, the three-day symposium richly documented the history, education, literature, art, and politics of the vibrant communities of Latinos in the Midwestern U.S. That such a rich and eventually fruitful conference occurred at the University of Iowa was somewhat unlikely, as Iowa was then the only school in the CIC (Committee of Inter-institutional Cooperation) without a Latino Studies program.

A new minor and an anthology 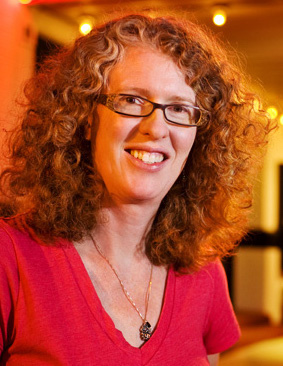 As part of the symposium, leaders from other CIC schools met with UI administrators to relay details about the programs at their home institutions. This was one important piece in providing a cohesive argument for and models of other Latino Studies programs. “The symposium generated momentum on the part of UI faculty and students for the establishment of an academic Latina/o studies program on our campus,” says Fox. “We felt that the time was right to go forward with a proposal for a minor.”

In January 2015, the UI’s interdisciplinary minor in Latino Studies began offering classes. It is one of several outcomes of conversations initiated during The Latino Midwest symposium. Another is a forthcoming book, The Latina/o Midwest Reader, edited by Fox and her two symposium co-directors, Omar Valerio-Jiménez and Santiago Vaquera-Vásquez (former UI faculty who are now, respectively, at the University of Texas at San Antonio and the University of New Mexico), which will be published by the University of Illinois Press in June 2017. The book is part of the Latinos in Chicago and the Midwest Series, which is edited by Frances Aparicio, Juan Mora-Torres, and María de los Angeles Torres. It was developed during the 2013 Obermann Summer Seminar, Teaching the Latino Midwest, which was co-directed by the same trio, plus Aparacio, who directs the Latina and Latino Studies Program at Northwestern University.

Furthermore, the web of shared thinking and scholarship has led to a newly funded project of the Humanities Without Walls Consortium (HWW). “Building Sustainable Worlds: Latinx Placemaking in the Midwest” brings together scholars from across the Midwest to explore the significance of Latinx Midwest efforts at placemaking. The group is asking several core questions:

As the co-PIs, including Fox, wrote in their application, “This project builds on a previous University of Iowa Obermann Center for Advanced Studies–funded regional collaboration on the Latino Midwest in the years 2012 and 2013.… It was a wildly successful collaboration that has resulted in new community-university partnerships in Iowa and elsewhere, a website, and an anthology of research generated by participants to be published by University of Illinois Press in 2017.”

The lead investigator of the HWW project is Theresa Delgadillo of The Ohio State University, who participated in the 2012 Latino Midwest symposium. The HWW project includes senior and junior faculty, as well as graduate students, from across seven universities. Participants’ work begins with a two-day workshop to be held at Northwestern University this summer that will focus on designing collaborative research. Three different faculty clusters—on cultural and historic sites, literature and film, and everyday performance—will undertake a year of collaborative research. In June 2018, the group will convene at the University of Iowa for a collaborative editing workshop, followed by a public presentation of the work at a workshop at The Ohio State University in September 2018.

“Through this project we want to strengthen regional networks of Latina/o-oriented community and academic groups, while also recognizing the long-standing presence and contributions of Latinas/os in the Midwest,” says Fox of the work on which she and her collaborators are about to embark.

The Humanities Without Walls consortium is a project of the Andrew W. Mellon Foundation, which provided funding to the Illinois Program for Research in the Humanities (IPRH) at the University of Illinois at Urbana-Champaign, led by IPRH Director and Principal Investigator Antoinette Burton, to support collaborations among a consortium of fifteen humanities institutes in the Midwest and beyond. By leveraging the strengths of multiple distinctive campuses, the initiative aims to create new avenues for collaborative research, teaching, and the production of scholarship in the humanities, forging and sustaining areas of inquiry that cannot be created or maintained without cross-institutional cooperation. To learn more, visit the consortium website at http://www.humanitieswithoutwalls.illinois.edu/index.html.