Beyond Justice: Understanding the Adjudication Process of Sexual Misconduct on College Campuses

Sexual misconduct is a serious issue on college campuses across the U.S. In fact, it is a civil rights issue, as it can undermine students’ ability and opportunity to pursue their education. What many people don’t understand is that sexual misconduct denotes a continuum of behavior—from persistent unwelcome sexual comments and advances to stalking, domestic violence, and sexual assault.

Since not all types of campus sexual misconduct are considered criminal or result in criminal charges, colleges and universities address reports of sexual misconduct through their student conduct policies and procedures. These processes are meant to support the educational mission of the institution while also recognizing that campuses are not courtrooms.

While the federal government provides guidance to institutions to design and implement their reporting procedures, investigations, and hearings; limited research to date has examined the campus sexual misconduct adjudication process. Carolyn Copps Hartley, a Spring 2018 Obermann Fellow-in-Residence and associate professor in the School of Social Work, is trying to change that. Since 2015, she has chaired the UI’s Sexual Misconduct Climate Survey subcommittee, which administers the Speak Out Iowa Campus Climate Survey, an anonymous survey created to give UI administrators an overview of the incidence and attitudes surrounding campus sexual misconduct, including sexual harassment, sexual violence, dating violence, and stalking.

“Why do so few students make a formal report?" 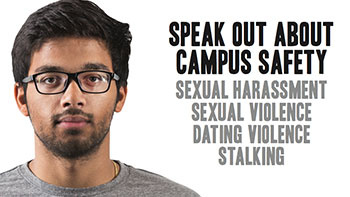 According to the recently released 2017 Speak Out Iowa survey results, only 39% of students who said they experienced sexual misconduct disclosed the experience to someone—and when they did, 94% spoke to a friend, roommate, or family member. Consistent with considerable research on the disclosure of sexual misconduct, few students told a formal support such as campus police, a university administrator, or a campus advocate.

“To start with, I want to understand why,” says Hartley. “Why do so few students make a formal report—even to a confidential victim advocate? Are they unaware of the available resources or their reporting options? Do they understand what happens when they report? Even if a student doesn't want to make a formal report, they can speak with a confidential reporting office, which can connect them with important support services, so it’s critical to figure out how we can encourage more students to access these resources.”

As a social worker and scholar of therapeutic jurisprudence—defined as “the study of the role of law as a therapeutic agent”—Hartley says adjudication processes have the potential to improve the psychological well-being of participants if they are treated in an empowering and trauma-informed way. This was keenly apparent in the recently well-publicized trial of a U.S. gymnastics doctor and the many young women who came forward to speak in a room filled with supportive peers under the guidance from an empathic and firm judge.

Hartley also wants to understand how we can increase the therapeutic effects of participating in a campus sexual misconduct adjudication process. “Participating in an investigation or a formal hearing might always be stressful,” she says, “but how can we better prepare participants for what will happen during the process so they feel more in control and supported? We need to understand what participants find helpful as well as how the process can be improved.”

Hartley’s previous scholarship, funded by the National Institute of Justice, has examined criminal and civil legal responses to violence against women. The adjudication process of sexual misconduct on college campuses is a new area of study for her—one that differs from criminal and civil proceedings in several key ways. First, students have several reporting options (to confidential and non-confidential offices) and they can choose to talk to a reporting office to receive assistance but not make a formal complaint unless the person who committed the behavior poses a threat to campus.

Second, while the university defines a continuum of behaviors as violations of the sexual misconduct policy, only the most serious behaviors, such as dating violence or attempted or completed sexual assault, might result in a criminal charge. As such, universities utilize a wide range of sanctions, from disciplinary probation to required educational programs to suspension or expulsion, for students found responsible for sexual misconduct. An example of an educational program is the UI’s Cognitive, Emotion Regulation, and Behavioral Skills Program.

Finally, the university routinely provides accommodations to reporting students to help address the impact of the sexual misconduct and support them in continuing their academic pursuits.  These accommodations are available during the reporting process and for the remainder of time the student is at the institution. Accommodations can include changes in housing, dining, work, or class schedules to restrict contact between parties during the investigation process, as well as requests for assignment extensions or approval of late withdrawals, counseling, health and mental health services, and disability services.

Hartley’s goal this semester is to understand how the sexual misconduct adjudication process works at the UI, from start to finish, in order to identify key research questions to examine the effectiveness of the UI process. To design such a study, “I need to understand how a student’s report moves though the system,” she says. “What happens? Who does the reporting student talk to, and in what order? How is the accused student notified of a complaint? What kinds of accommodations are provided and when?”

Studying the adjudication process is a daunting task: not only are there confidentiality issues, but campus cases can take a wide range of forms, each with its own procedural intricacies. The student making the report may request accommodations but ask that no action be taken or the accused party may not be affiliated with the UI or their affiliation is unknown; there are many variables that affect the route the process takes and who is involved. Hartley is working closely with the UI Office of the Sexual Misconduct Response Coordinator to conduct interviews with UI reporting offices, victim advocates, and campus investigators.

In the short-term, Hartley plans to compare the UI’s sexual misconduct adjudication process with other universities’ models and submit a grant proposal to the National Institute of Justice or the Office for Victims of Crime to examine the experiences of students involved in the UI’s process. Potential research questions might include, “What are the effects of different accommodations on students’ psychological well-being and academic persistence (i.e., the likelihood that they will graduate from that institution)? What aspects of participating in the reporting or investigation process predict students’ positive or negative experiences? How do both reporting parties and responding parties (students accused of sexual misconduct) experience the process?”

The findings of such a study could help the UI and other universities ensure that all students, especially those who experienced sexual misconduct, are treated with care, concern, honor, and dignity throughout the complaint and judicial processes.

Contributing to a trauma-informed institution

So far, Hartley has been impressed with the UI’s commitment to addressing sexual misconduct on campus, noting that people from across the UI and the local community regularly attend meetings of the UI Anti-Violence Coalition, of which she’s a member. She hopes the findings of her research will contribute to the university’s ongoing efforts to use a “trauma-informed” approach when responding to students who’ve been impacted by the traumatic stress of sexual misconduct as well as other traumatic experiences—everything from childhood abuse and bullying to experiences with a serious illness, loss of a family member, or serving in combat—that may impact their physical and emotional well-being and academic success.

This fall, Hartley will teach a first-year seminar on the #MeToo movement, called “#MeToo and Sexual Harassment: Just a Trending Hashtag or Real Social Change?” She created the class as a forum for first-year undergraduates in any major to “have courageous conversations” about sexual harassment laws and policies in the workplace and on college campuses. The course will explore how society has historically perceived women as biased or untruthful witnesses of their own victimization experiences and will dissect how #MeToo has started to change perceptions of women’s credibility. It will also identify groups who remain at risk of being left behind by the movement.