A Clown Walks Into the Matrix... 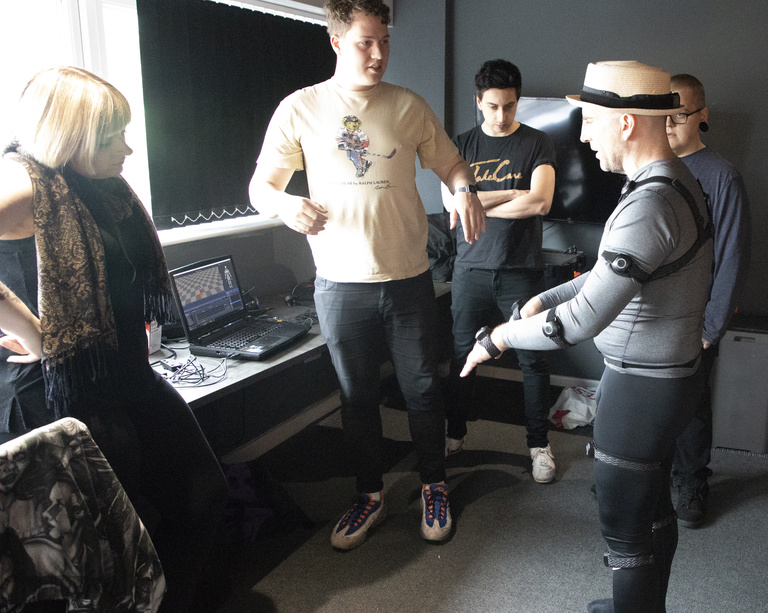 Paul Kalina is wearing a suit that has three kinds of technology embedded in it. He is a clown who has performed bedside for kids in hospitals and on the barest of stages. But in June 2019 he is in Prague for the world’s largest festival of theater and stage design, the PQ—or Prague Quadrennial. He is going on stage ostensibly to play a ukulele and get into comic shenanigans.

But really, he about to interact enter a dance with technology—which is where the fancy suit comes into play. Paul will be “sucked” into a screen. The LED lighting embedded in the suit will light up. He will affect the cutting-edge technology and it will affect him.

Interacting with technology in real time

Media Clown was developed by Kalina (Theatre Arts) and Daniel Fine, a faculty member of the Theatre Arts and the Public Digital Arts Cluster, during a Summer 2018 Obermann Interdisciplinary Research Grant. Fine says, “How a performer interacts with technology is the holy grail of live entertaining right now.” Although many performers have introduced technology as a relatively stable element in productions, such as dancing with a projected image, those on the furthest edges want to relate with technology in real time without choreographing a set outcome.

This kind of exploration invites an inquiry into our relationship with technology. Rather than merely enhancing an experience, technology becomes a player in the production, raising innumerable questions, including how it shifts, amplifies, or interferes with century-old analog practices.

Kalina brought his rich knowledge of commedia dell’arte, a 16th-century Italian progenitor of modern clowning, to an earlier Obermann-sponsored collaboration. “The strength of live clown performances,” he says, “lie in their ability to adapt to the response of the audience in real time. The performer must be able to read the audience and shift on a dime, to tailor the performance to the needs of the audience that night in order to create a communal experience.”

The clown as societal mirror 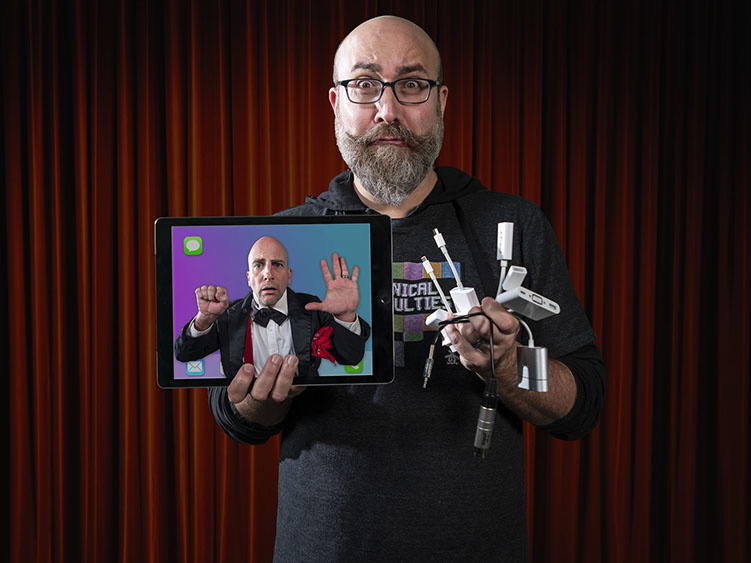 As the contemporary performance space expands beyond the stage to include audience’s smartphones, emerging technologies, and special digital media effects, Kalina and Fine wondered how “the clown’s role as societal mirror and creator of community changed in the digital age where many communities exist in digital realms?”

This kind of technology is expensive—the two suits used in the show cost $95,000, so Kalina and Fine used their time at Obermann to apply for major grants as they fleshed out how clowning can humanize technology. Their hard work paid off when they were invited to present their work-in-progress at the 2019 Prague Quadrennial of Performance Design and Space, a prestigious international exhibit and festival.

The Media Clown team, including theatre graduate students Courtney Gaston, Chelsea Regan, and. Sarah Hamilton, headed to the United Kingdom for a stint at the Backstage Academy, a tech school in a conglomeration of theatre and stage organizations that produce scenery for large-scale shows (for artists like Hugh Jackman). Together, they created a high-tech clown show using Hologauze, a holographic effect screen that made it appear that Kalina was clowning in a virtual world. 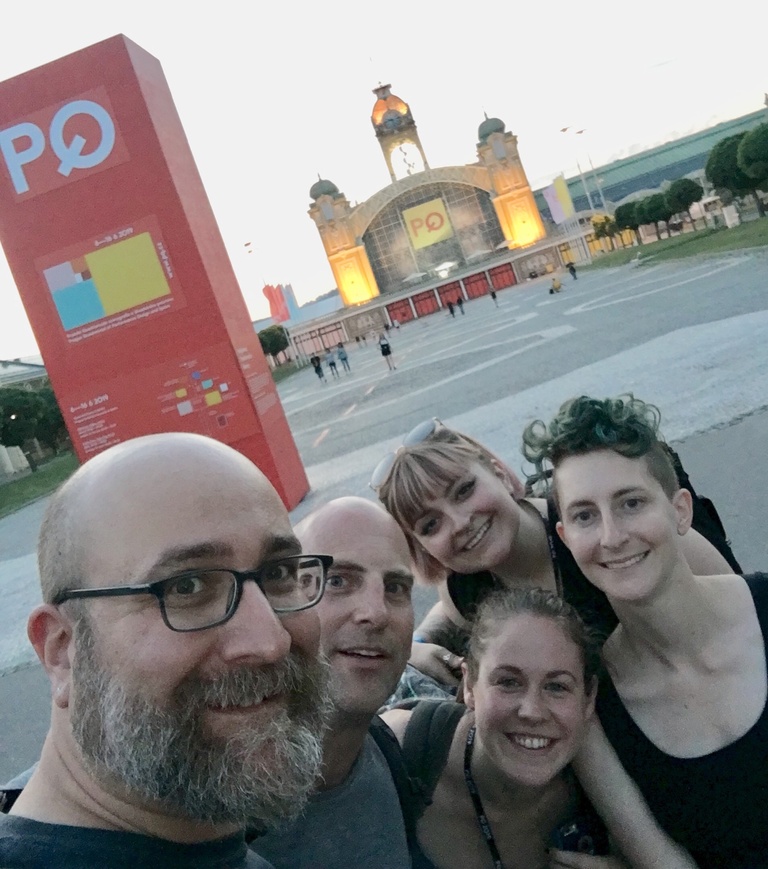 Their adventures continued in Prague. At the first show, technical difficulties pushed back their start time by an hour and one of Kalina’s props broke. The “disasters” got a huge laugh and the team improvised: “It’s interactive comedy,” says Fine, “It changed every night.”

PQ was a success, but only the beginning for Media Clown. Kalina and Fine are searching for rehearsal space with the technology to send not only Kalina but the audience onto the screen. How can the clown swim in the ocean and walk on the ceiling, changing his relationship to space? What is the combined digital and physical playground where audience and clown meet? They are in short, still on a journey toward that holy grail.

There are no plans to perform Media Clown locally; however, on October 14, 2019, Kalina, Fine, and the three graduate students, will share a video of the Prague Media Clown performance and talk about the making of this project and its future. The presentation is from 4:00 to 5:30 pm at the Iowa City Public Library, Room A. Learn more: https://obermann.uiowa.edu/events/media-clown-analog-clown-enters-digital-space