Arriving at the University of Iowa in Fall 2018 to begin his graduate studies, Dominic Dongilli knew that he wanted to participate in his new community in multiple ways. It was not going to be only about the library and classes. With that intention in mind, he applied for the new Humanities for the Public Good (HPG) advisory board last spring. 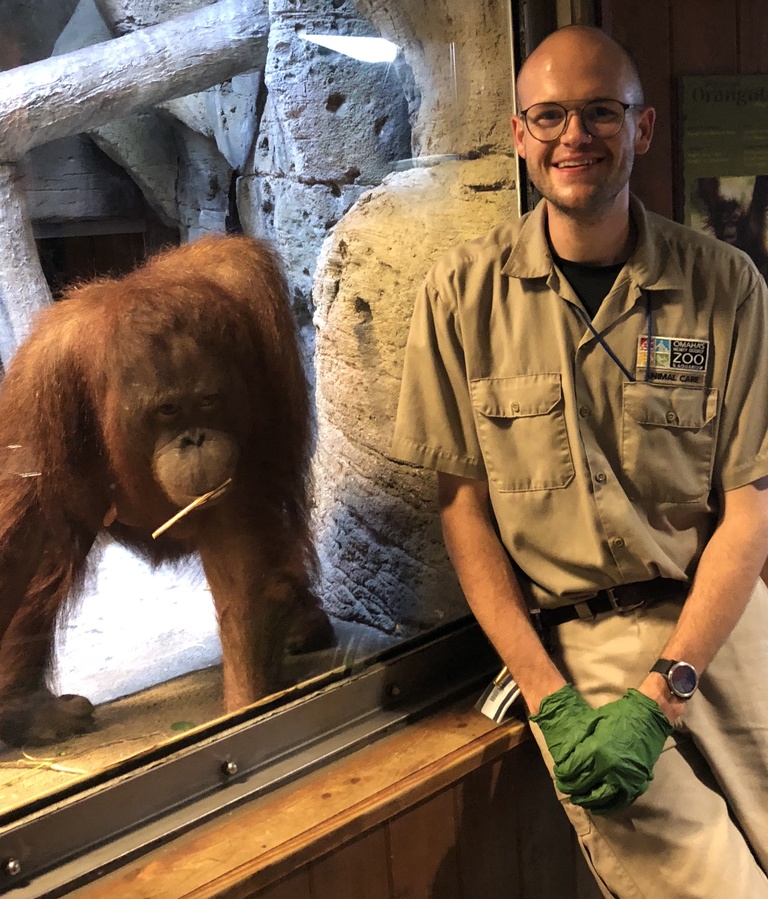 “It was never my intention to be a solitary academic,” says the Lincoln, Nebraska, native, who entered the University following a three-year career as a zookeeper. (Don’t worry, we’ll get to that.) “Both of my parents work in healthcare in clinical fields with advanced degrees, so the idea of having a PhD and pursuing research outside the academy was very familiar to me.”

A PhD candidate in American Studies who is also pursuing a certificate in Gender, Women’s, and Sexuality Studies, Dongilli said that both departments support “expansive” career exploration. His scholarly interests are in environmental studies and feminist science studies. It was American Studies’ dedication to cross-disciplinary and overtly political work that brought him to the discipline. Additionally, he was drawn to Iowa by Kim Marra, a UI professor in American Studies and Theatre Arts, and her research and creative work on horses.

Part of the conversation

As he learned about the goal of HPG to create a new humanities PhD program aimed at students who wish to work outside the academy, Dongilli said that HPG's mission fits with his own cross-disciplinary interests and hopes for an advanced degree: “There is potential for graduate education to be more than what it currently is. I want to be part of a conversation pushing it forward.”

The HPG advisory board, which equally comprises faculty, graduate students, and staff, is divided into five self-selected subcommittees. Dongilli has spent the past year serving on the Degree Structure subcommittee, along with two staff members, both of whom have PhDs, and a faculty member. The collaborative process was a counterbalance to the more solitary research demanded by his coursework. It was also a window into a new way of working.

“All four of us have big personalities and very different ways of doing things,” he says, admitting that he was initially hesitant about what the subcomittee could accomplish. “In the past, I’ve always assumed that you need focus to achieve an outcome. But this has been so generative! It’s been very diffuse, which has actually been to our benefit.”

Dongilli's enthusiasm for the vision of HPG and the opportunity to continue to work collaboratively with the program's core administrative team led him to apply for the Graduate Research Assistant position. (Torie Burns, an English PhD candidate, will be departing the role in July.) In 2020–21, he will work especially closely with Mellon Postdoctoral Fellow Ashley Cheyemi McNeil, who says of his work this year, "Dominic engages a complex balancing system of radical imagination, deep focus on details, and thoughtful interweaving of big 'what if' musings through it all. He offers an unassuming steadiness to his colleagues: his note-taking makes intellectual art out of meeting minutes, he can readily suggest a practical application to pedagogical abstractions, and he foregrounds values in each aspect of his subcommittee’s work.”

Dongilli brings a richness to HPG via his work experience beyond the academy, an undergraduate degree in the life sciences, and a deepening dedication to community art spaces. He is a volunteer at Public Space One, Iowa City’s community-driven art space, and even tried his hand at curating an exhibit last fall, “Bodies of Knowledge.” The nonprofit's flat organizational structure, in which artists are administrators, and volunteers and staff hold similar positions, appeals to him and provides ideas for HPG's future.

Perhaps the deepest knowledge that Dongilli will bring to his work with HPG comes from the three years he spent working well beyond the academy as a great apes zookeeper. The day after he received his BS in biology from Creighton University, Dongilli began working at Omaha’s Henry Doorly Zoo and Aquarium. He decided to work in zoos after completing a long internship and work program at the Lincoln Children’s Zoo that began when he was in seventh grade. By the time he was a high school junior, he had a job taking animals for visits at nursing homes. Now, he is confident that zoos will be central to his dissertation research.

Dongilli describes his work with gorillas and orangutans as a cross between that of a nurse and that of an activities director, with some research thrown in. In addition to the joy of developing interspecies relationships, Dongilli said that he also appreciated that his zookeeping work was necessarily collaborative: “Because we were working with potentially dangerous animals, we always worked in pairs.” Joining the HPG team is a chance he welcomes to return to routine, collaborative work—a counterbalance to the independence of his ever-deepening life as a scholar. (And the HPG admin team promises not to be too dangerous!)