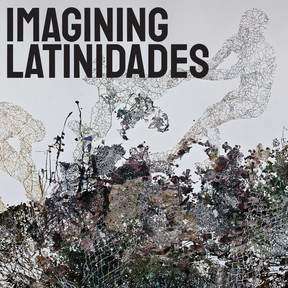 When COVID-19 interrupted the late spring events and culmination of the yearlong Mellon Sawyer Seminar Imagining Latinidades: Articulations of National Belonging, we didn't know that the events would eventually end up online and across institutions. In 2019–20, seminar co-directors Darrel Wanzer-Serrano, Ariana Ruiz, and Rene Rocha worked across disciplines to organize six symposia, a film series, and a podcast. With Wanzer-Serrano now in the Communications Department at the University of Texas A&M and Ruiz in the Department of Literature at the University of California–San Diego, the final events are being co-sponsored across institutions.

A yearlong investigation into how Latinidad—the state of being or appearing Latina/o/x—is imagined has been the mission of the UI’s most recent Mellon Sawyer Seminar. This interrupted event will come to an exciting close this Friday and Saturday with two days of presentations focused on “Performing Latina/o/x Futurity.”

Led by Wanzer-Serrano, Ruiz, and Rocha (Latina/o/x Studies and Political Science, CLAS), Imagining Latinidades: Articulations of National Belonging began in Fall 2019. Organized around a series of six two-day symposia, each with a different theme, the organizers brought eminent speakers to campus to explore “the ways in which Latina/o/x people disrupt dominant and dominating articulations of national belonging” and “how articulations of national belonging (particularly those that exclude Latina/o/x folks) puncture the social fabric in problematic ways.”

The talks presented in 2019–20 covered issues of religion, voting demographics, the arts, healthcare, and more. There were specific presentations focused on sanctuary cities, the application of Black abolition language to the elimination of ICE, and a pre-election talk on the need for research into Latinx media audiences in order to make sense of how the “Latinx vote.” One speaker, Natalia Molina, a professor of American Studies at the University of Southern California, has since gone on to be recognized as a 2020 MacArthur Fellow.

When COVID-19 closed campus last spring, the final two events of the Sawyer Seminar were postponed. By summer, two of the organizers departed Iowa City for positions at other institutions: Wanzer-Serrano is now in the Communications Department at the University of Texas A&M, and Ruiz is in the Department of Literature at the University of California–San Diego. But via Zoom and co-sponsorship from their new universities, they’ll join Rocha to host a final closing event this Friday and Saturday.

Performing Latina/o/x Futurity will feature seven scholars of communications, literature, and performance studies. The following is a list of the speakers in chronological order of appearance, with the first four appearing on Friday and the latter three on Saturday—all via Zoom (view full schedule and register here):

In addition to the symposia, the co-directors are also offering several more episodes of their podcast. Rocha says the culmination of these events has been significant: “Imagining Latinidades has brought together the Latina/o/x community at Iowa. It’s created a space for us to discuss big ideas together and to showcase our work in front of a broad swath of faculty, students, and area residents. With the event shifting to an online format, we are hoping to extend our reach even further. Looking back, we will see the Sawyer Seminar as an event that cemented the presence of Latina/o/x at Iowa.”

The events are free and open to all.

The final symposium of Imagining Latinidades is co-sponsored by the UI Obermann Center for Advanced Studies, the Institute of Arts and Humanities at the University of California–San Diego, the Glasscock Center for Humanities Research at Texas A&M University, the Iowa City Public Library, and the UI Latina/o Studies Program.