The first-ever University of Iowa graduate seminar in public history was offered this spring semester. The class’ end result, an exhibition and oral history about the flood of 2008, “Rising Waters, Rapid Changes," will be on display starting May 4 in the window of Hands Jewelers. The project is co-sponsored by the Obermann Center.

Last year, graduate students in history petitioned the department for more offerings in the growing field of public history. Professor Jackie Rand (History, CLAS), who has worked at the Smithsonian Institution and served as a consultant to the Newberry Library in conjunction with her scholarship on the history of Native North America, state Indian policy, and law, decided to teach the class not only because of the students’ interests but her own growing commitment to public history.

The National Council of Public Historians defines public history as “a movement, methodology, and approach that promotes the collaborative study and practice of history; its practitioners embrace a mission to make their special insights accessible and useful to the public.” This collaborative and very outward facing approach was key to the new course.

“We came to see the project as a bridge between the rigorous academic research to which we are accustomed and an intellectual community that extends well beyond the academy,” says Rand of the class that included students with research interests spanning from early modern France to Alaska Native and environmental history. 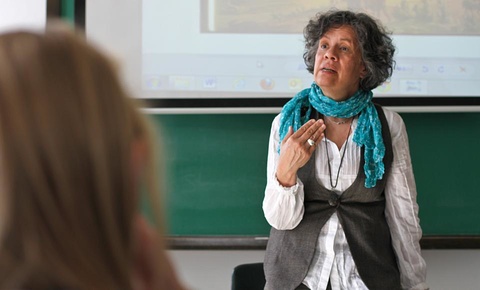 “This public-friendly interpretation is the result of an entire semester's worth of archival research, collection of oral histories, design considerations, group work, and consultation with experts beyond our department just as if we were writing an article or a book, typical methods of sharing results of research,” she says.

Students interviewed sixteen local people about the flood for oral histories, met with Connie Mutel, a local author and expert on prairie degradation, and worked with Margaret Wenk-Kuchlbauer, a designer from the UI Theater Department, to produce the exhibit.

The class did readings and archival work typical of a history seminar, but they also learned and honed skills that one student, Eric Zimmer, a PhD candidate in History and the 2013 Obermann Graduate Institute Senior Fellow, said would be invaluable to future jobs. “We found photographs and obtained copyrights, wrote a press release, organized a call list for oral histories and conducted them, worked with a downtown business, and all sorts of other things we just aren’t trained to do in more conventional academic history classes,” he said, naming just a few of the tasks accomplished by the class.

Zimmer also added WordPress and audio editing to his skill set. As one of the co-chairs of History Corps, a website that features interviews and oral histories celebrating the humanities at the University of Iowa, he spearheaded digitizing the class’ work, adding photos and the interviews to the website. 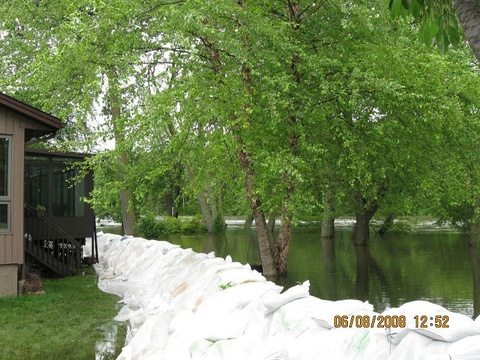 The class took as its focus the so-called Mosquito Flats neighborhood, a subdivision that was built in 1959 and which sustained major damages in 2008. Today, much of the neighborhood is a series of empty lots. But the class went back much further in time, seeking out the causes for the massive flooding. “The story of the 2008 flood begins nearly two centuries ago. Around 1830, settlers began to dramatically change the Iowa landscape from one of diverse plant life to row-crop agriculture,” they write on the web site.

Rand says that the shift from a more traditional academic paper to an exhibit such as Rising Waters, Rapid Changes is a relatively easy one to make. “The academic historian's ‘thesis’ became the message,” she says.  “‘Arguments and evidence’ were translated into visual signs, and the 'conclusion' is instead an open-ended question.”

The success of the class’ thesis or message will be measured in the public’s reaction to its work. Zimmer looks forward to adding to the interviews on the History Corps site about the flood, as well as taking on new public history projects. He is already talking to the Iowa City Public Library and the Pentacrest Museums about possible collaborations. He tips his hat to the Graduate Institute for the training he received to make such collaborations fruitful; “My participation in the Institute shaped my thinking for this entire project.”