Standing on the Great Wall of China in 1991, Mohammad Chaichian wondered at the feat of architecture and engineering that extended in front of him as far as he could see. Although the wall was ostensibly built to keep out nomadic “barbarians,” Chaichian, a sociology professor with training in architecture and urban planning, wondered how those on the other side, the so-called barbarians, viewed it. He suspected that like the recently bulldozed Berlin Wall, the Great Wall of China had a more complex history.

Chaichian, who is a professor at Mount Mercy University and a Spring 2012 Obermann Fellow-in-Residence, was spurred by his visit to China to make a study of walls around the world.  Eventually, he trekked 500 miles along the U.S.-Mexico border, walked the 25-mile remnant of the so-called Death Strip—a section of the former Berlin Wall—hiked the entire length of Hadrian’s Wall in northern England, and traversed a stretch of the ancient Great Wall of Gorgan in Iran. For logistical reasons, only the wall between Israel and the occupied Palestinian territories eluded him. His studies of these barricades and their history culminated in a new book, Empires and Walls:  Globalization, Migration, and Colonial Domination (Brill, 2013).

Chaichian came to understand that while nations provide pragmatic reasons for their wall building, these are unsustainable fortifications that represent essential inequities. As he followed each wall, he became increasingly interested in the reasons behind it.  His questions echoed those of poet Robert Frost who wrote, “Before I built a wall I'd ask to know what I was walling in or walling out,  and to whom I was like to give offence.”

Bisecting Britain east to west and separating Roman-conquered peoples to the south and a diverse group of tribes to the north, Hadrian’s Wall began construction in 122 AD. On one side were the civilized subjects of the Roman Empire, on the other “barbarians.” But to Chaichian this wall was more a symbol of power to the conquered and warring factions:  “Seen from the eyes of the tribal people from both sides of the barrier in 2nd-century Britain, [the Wall] must have been a spectacular representation of the immense capabilities of an occupying force, both economically and militarily, to construct and maintain a monument of such magnitude as far as the eye could see.”

The power to build and control such an immense structure is usually, says Chaichian, “an indication of declining power and authority and inability to manage existing social conflicts between the dominator/colonizer and the dominated/colonized.” Although the Roman Empire would not begin to disintegrate until late in the 4th century, to Chaichian the mere existence of the Wall (photographed by Chaichian, above) indicated a lack of ability on the part of the Romans to nationalize the tribes under their control. It also surely created a sizable financial drain on the Empire—a sort of failure in itself. 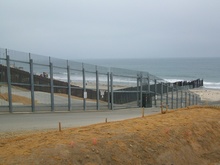 Flash forward to November 2005 and the U.S. Department of Homeland Security’s announcement of the Secure Border Initiative. Spanning 670 miles of the 2,000-mile U.S.-Mexico border, the “fence” was planned as a way of reducing illegal immigration. But why, asks Chaichian, did it take 150 years to erect such a barrier; “If this was about protecting our border, why didn’t we build it in the 1950s or 60s?”

The answer lies in the 1994 signing of the North American Free Trade Agreement (NAFTA), which integrated the two countries’ economies. Mexico’s rural and agricultural economies were decimated as the U.S. glutted their markets with cheap corn and other American agricultural products, and the Mexican workforce moved increasingly to U.S.-owned factories, or maquiladoras.

Maquiladoras' Effects on the Border

Today, Mexican border cities are home to hundreds of maquiladoras, many of which have a “twin” on the American side—usually a smaller community that has corporate management offices and distribution warehouses. The manufacturing side needs many more workers than the management side of this equation, hence a significant growth of the population of Mexican border cities following NAFTA. Literally needing more and more space, these cities have expanded right up to the legal demarcation point, in sharp contrast to the U.S. communities, which have tried to maintain farmland or other uninhabited space between their city limits and the border.

“This spatial northward gravitation of Mexico’s urban built environment speaks volumes about the social psychology of a long, unresolved history of Mexican-U.S. relations”; writes Chaichian, “the former still considers the territories north of the border part of Mexican territory, while the latter has to guard the annexed colonial territories and keep the ‘barbarians’ at an arm’s length.”

The border fence (photographed above by Chaichian at the point that it meets the Pacific Ocean), he says, is largely a way for the U.S. side to have a control valve—a method for letting more workers in or keeping more out. The two economies have long been integrated (“pulsing at the same rate,” is how Chaichian describes it), but now the U.S. can control the flow of workers for its own economic benefit.

It is not a sustainable situation. Chaichian, who studied architecture at the University of Tehran, details the different kinds of border fences, including one incongruously called a “picket fence.” This behemoth project, which is not yet complete, is arguably never ending given the perpetual destruction to parts of the fence by people digging holes underneath it or torching openings into it, not to mention the wear and tear of the harsh desert elements. Meanwhile the number of fatalities linked to border crossings has increased dramatically.

Again and again, Chaichian argues that erection of a wall signals the end of an empire and suggests untenable disparity. “Walls not only protect the people building them but also indicate a heightened level of social inequality,” he says, pointing toward gated communities and high tech campuses as examples within our own culture. “Usually the builders of walls are not in tune with the outside community and have a perceived threat of violence. But fortification signals an inequality that was created by the same people who built the wall.”