Vero Smith is a curator and scholar of architecture who has a passion for making high-level research accessible to the public. As the Associate Curator of the Legacies for Iowa project at the UI Stanley Museum of Art, Smith brings her training in architectural design gained via an MA at the University of Iowa, an MA of Design Studies from Harvard University, and her experience at the Obermann Graduate Institute on Engagement and the Academy to bear on her work.

“Everything I do in my professional life is informed by the Institute,” says Smith, who attended the Institute in 2014. “I take with me from the Institute the fallacy that research needs to be inscrutable to the public.”

In March 2018, Smith launched live-streamed educational videos that featured conversations with other scholars about issues related to objects in the museum’s collection. These conversations covered a diverse range of topics, including art and disability, art and archival practice, and legal issues connected to the arts.

She points out that while many people are intimidated by art and don’t have the language with which to discuss it—something she experiences while sharing the museum’s collections around the state as part of the Legacies for Iowa project—most of us are comfortable with and have associations with color. She looks forward to a future statewide program that uses colors as a jumping-off point to delve into the collection.

Smith got the idea while teaching art history at Kirkwood Community College: “Many of my students pointed out that we spent too much time during the class on so-called 'dead white people art.’ It made me curious about how to marry equity with teaching and curation.” 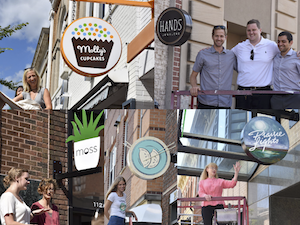 Last year, another of Smith’s projects brought scholars and the public together. Smith curated an exhibition at the Figge Museum of Art in Davenport on the history of commercial signage. In conjunction, she organized a two-day symposium of the same name, “What’s Your Sign? Retail Architecture and the History of Signage,” which included talks by graphic designers, urban planners, anthropologists, and art historians. Additionally, she worked with the City of Iowa City Downtown District’s CoSign project, which partnered local artists and craftspeople with small businesses to create exciting and distinctive new signs.

This fall, she’s again working with Iowa City to create a project that riffs on the upcoming Museum of Art and Figge exhibition, Going Home, about what "home" means from an architectural perspective. Smith is inviting local architectural firms to create models of what they conceive of as the ideal 21st-century home. The models will be on display in October in the pop-up pods that the City has erected on the downtown pedestrian mall, and the architects will host conversations about their work.

Meanwhile, Smith is part of a team, along with Kyle Rector, associate professor of Computer Science, that recently won an Arts & Humanities Initiative Grant to use crowdsourced audio technology to help people with low vision interact with the art in the museum. The new technology is scheduled to launch in early 2019.