Tammy Nyden calls herself an accidental ethnographer. She is a scholar and mother of two, but it’s the practice of ethnography, in which one embeds herself within a community in order to study it, that best captures her current intellectual and personal passion.

Her now-teenaged son was diagnosed with Tourette syndrome and obsessive-compulsive disorder eight years ago, and with autism two years later. In 2013, his behavior became more difficult to manage, and it became clear that he had a mood disorder. With that discovery, Nyden was tossed into the world of childhood mental illness.

“I didn’t choose to be in the community of parents of children with mental health issues,” says Nyden, who is a faculty member in the Philosophy Department at Grinnell College. Since arriving in that community, however, she’s learning everything she can, and she is hardly content to be a passive bystander.

At the time that the scope of her son’s illness became apparent, Nyden was an Obermann Fellow-in-Residence, working on a book about the history of experimental physics in 18th-century Leiden, Netherlands. She planned to take several two-week research trips abroad, but that research and, subsequently, the book project were derailed as her son’s situation demanded her full attention.

As she tried to navigate multiple systems—schools, insurance, healthcare—Nyden started to realize the dearth of resources or clear pathways to answers around children’s mental health.

“I was so privileged, and yet I couldn’t get the things my kid needed,” she recalls. “I started to get involved and was invited to attend a listening session that the Department of Human Services held in Dubuque with parents in 2014. I kept asking, ‘Who is advocating for us?’ When it became clear that no one was, she and two other parents, Tara Witherow and Mindy Pace, started a group—Parents Creating Change—on the spot. By the summer, they were partnering with NAMI (National Alliance on Mental Illness).

Mothers on the Frontline

Also joining her on her journey have been two friends, Dionne Bensonsmith, a faculty member at Claremont College who teaches political science and public policy, and Angela Riccio, an advocate in Seattle. Nyden met Bensonsmith during their faculty orientation at Grinnell College, and Riccio is a childhood friend. Although Nyden knew each of them before mental health became a dominant issue in their lives, all three have children who, entirely by coincidence, have mental health issues. 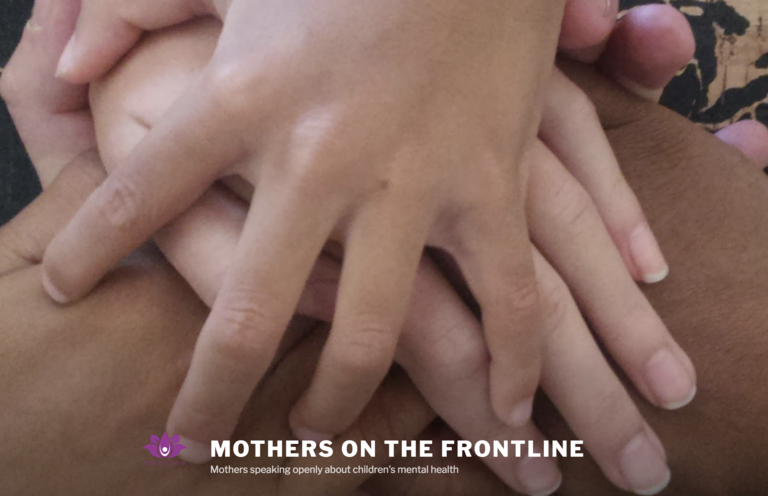 The three women created Mothers on the Frontline, a nonprofit that uses storytelling to promote caregiver healing and children’s mental health. Their vision is “a world in which mental health is destigmatized, respected, and prioritized as an integral part of the overall health of individuals, families, and communities.” Storytelling serves two main functions. First, it is a healing modality that helps people to feel less alone as they connect with others who have similar experiences. Second, it produces stories people can share with others in order to effect change in legislation, funding, school policies, systems of incarceration, and more.

Through Digital Bridges for Humanistic Inquiry, a multi-year initiative between Grinnell and the University of Iowa and funded by the Andrew W. Mellon Foundation, Nyden is developing the Mothers on the Frontline website, as well as another site, Mental Health Policy and Outreach.

Nyden’s advocacy work has ebbed and flowed as her time has allowed, but it is nonetheless substantial. She is the founder of NAMI Johnson County’s Children Coalition, has served on the advisory committee of the Iowa Children’s Mental Health and Well-being Advisory Committee, and has co-chaired the statewide Coalition for a Children’s Mental Health Redesign in Iowa—just to name a few.

Activism through a Philosophy Lens

While Nyden admits that it may be difficult for others to see, she finds clear ties between her current work and her training and interests as a philosopher. Ontologically, she points to the Cartesian and Lockeian assumptions that still undergird our public policy: “Our systems are based on the idea of autonomous individuals; we are islands that can do what we want. A child, however, is always embedded in other systems, especially the family, but also education and healthcare,” she points out.

Epistemologically, she makes a nod to the way in which any researcher’s work is informed by his or her existing narratives. When it comes to mental health, the predominant narrative is that kids do not have problems unless their families, especially their mothers, mess them up. This is definitely a preconception she is trying to surface and dispel.

Another philosophical principle that undercuts our ability to transform systems, including many related to mental health, she says, is Descartes’s dualistic approach to mind/body separation and his will-intellect distinction. While we still use this to criminalize certain behaviors, Nyden alludes to contemporary neuroscientific evidence showing that when damage occurs to the part of a person’s brain responsible for affect/emotion, that person cannot make choices the same way. “And yet,” she says, “we routinely criminalize mental health.”

Nyden is again an Obermann Fellow-in-Residence, this time as part of the Digital Bridges for Humanistic Inquiry initiative: A Grinnell College/University of Iowa Partnership, an Andrew W. Mellon Foundation-funded grant that helps University of Iowa and Grinnell College scholars explore teaching, learning, and research in the digital liberal arts. She has spent her Fall 2018 residency creating a new course for which she also received a Grinnell Innovation Grant. The first iteration of the course, “Digital Storytelling for Social Justice,” will focus on issues of the school-to-prison pipeline, and Nyden is creating an archive of first-person digital stories.

This digital storytelling and a podcast are examples of how Nyden has creatively meshed her life situation and her scholarship. As a single mother, it's been crucial for her to maintain her life as a scholar, while also parenting fully and being an advocate. “I had tenure already; that was key,” she says. She is unabashedly grateful for the support she has for her work from Grinnell, a school known for its dedication to social justice. In 2016, for example, she won the Isabel Turner Award from the Iowa City Human Rights Commission, which Grinnell valued more than many colleges and universities might for work not directly linked to research or teaching.

“I’ve always thought that philosophy was supposed to help us live better,” Nyden says of her discipline. “I am not interested in just theorizing. I need to be part of the connective piece—connecting the theory to the community.”

In addition to honing her digital skills, such as podcasting, in order to reach a wider audience, she is also immersing herself in social justice practices, attending a conference for activists, and learning more about nonprofits that are embedded within colleges.