Obermann Fellow-in-Residence Catherine Stewart’s current book project, The New Maid, relies in part on a highly unreliable source—student essays. Specifically, Stewart is interested in what is divulged through a cache of papers written by students at a private women’s college in the South in response to the topic, “Negro servants in my household.”

Written between 1928 and 1940, the nearly 100 essays that Stewart is working with display a range of nuance and awareness. They are a rare and relatively unedited glimpse into the lives of middle- and upper-class Southern white families. Taken as a whole, the essays provide a window into changing attitudes toward African American women in service positions during the Great Depression, as well as their working conditions.

“I find first-person narratives to be very compelling,” says Stewart, who is a Professor of History at Cornell College and is at the Obermann Center during all of 2019. “They are unreliable narrators. But we all are! We all have a fragmentary lens through which we look.”

The fragmentary glimpses allowed by the essays provide clues as to how African American household laborers carved out space for themselves on the job. The students describe servants using the telephone for their own purposes, reading newspapers and magazines, or listening to the radio, activities they were probably more apt to perform when a child was around, as opposed to a parent of the household.

Stewart finds it useful to see how the domestic workers were using their positions in more affluent houses to garner information and connect to the larger world. She also is taken with the differing sensibilities that the student writers show toward their subjects.

While some of the students knew the servants’ full names and had a sense of their families, writing about them in a tone that suggested an awareness of them as people with lives outside of their household positions, other students were fully invested in the system of racial inequality and were disparaging when workers were not sufficiently deferential. Not using “ma’am," for instance, was noteworthy and offensive to some. Stewart finds threads of individual acts of resistance by these workers that point toward the coming civil rights movement, even in small ways. One servant, for example, seemed to wryly comment on the custom of giving cast-off clothing in lieu of wages when she wore her employer’s used dresses to work.

The New Maid—which nods to both “the New Deal” and “the new woman”—looks at African American domestic workers in the pre-civil rights South. “Because of the Depression,” says Stewart, “women are working outside the home and need more domestic help, and at the same time, the New Deal’s Women’s Division sought to professionalize household work.”

The book dovetails with Stewart’s first book, Long Past Slavery: Representing Race in the Federal Writers’ Project (University of North Carolina Press, 2016), which uses ex-slave narratives collected under the auspices of the Works Progress Administration (WPA) to examine how 1930s debates over race and the legacy of slavery shaped representations of African American identity.

Readily available via the Library of Congress, Born in Slavery: Slave Narratives from the Federal Writers’ Project, 1936 to 1938 contains more than 2,300 first-person accounts of slavery and 500 photographs of former slaves. The narratives were collected by unemployed white-collar workers. In some Southern states, there were separate black units that worked apart from white teams. Some of the most important work was done by such a unit in Florida, which included novelist-anthropologist Zora Neale Hurston, on whom Stewart focuses in order to compare the differing experiences of black employees on the Federal Writers’ Project versus that of white workers, such as the folk song collector John Lomax, who, as a federal director, significantly shaped the Ex-Slave Project.

The involvement of Hurston and others—like poet and Howard University Professor Sterling Brown—marked one of the first times that African Americans were able to form their own public narrative about the history of slavery, emancipation, and the ongoing struggle for equality. While some of the leaders of the project, such as Lomax, pushed for a folksy and entertaining approach, others, including Hurston, recognized a unique opportunity to document a quickly fading history.

“The Negro Units found themselves under extra scrutiny,” Stewart says. When narratives were uncomfortably plain in details of abuse, the interviewers were accused of “Negro bias.” On the other hand, white interviewers, who often missed signals of humor and indirect speech that reflected greater truths, were never questioned for any inherent bias.

Domestic workers at the intersection of race, class, family

In The New Maid, Stewart also examines both the bestselling novel Imitation of Life and the 1934 film version. She is using a rare household survey collected by a Southern civil rights organization during the 1920s and 30s, which documented Southern white employers’ expectations, hiring practices, and pay scales; and she is looking at WPA programs focused on domestic service.

With the book, which is under option with the University of North Carolina Press, Stewart hopes to address a dearth of research on African American domestics after the end of slavery but prior to the civil rights movement. “I think there's a growing interest in and public awareness of domestic workers as an undervalued and exploited labor force, here within the U.S. but also in other countries as well,” Stewart says. “Recent films, like Roma and Lila Aviles's The Chambermaid, have helped raise awareness about the ways gender, race, and class intersect in systems of privilege and inequality. I hope to expand our historic understanding of these workers’ lives and experiences here within the U.S., and examine how the politics of race and the economic depression of the 1930s impacted the dual struggle for black equality and workers’ rights.” 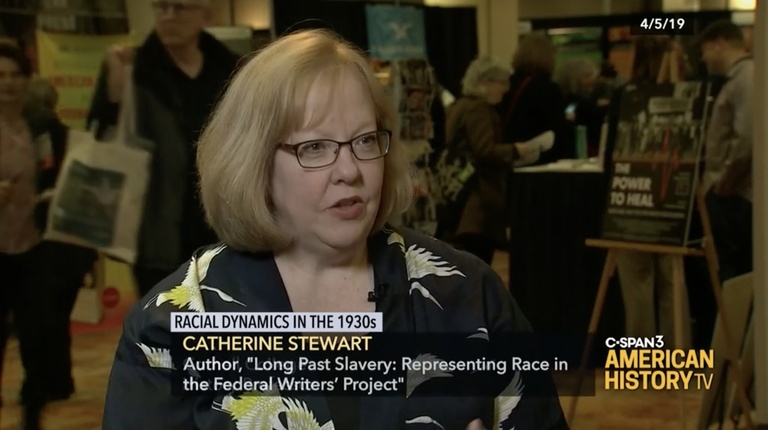 Stewart was interviewed about both projects by C-SPAN during the recent Annual Meeting of the Organization of American Historians in Philadelphia. Watch the interview here: https://www.c-span.org/video/?459604-4/racial-dynamics-1930s.