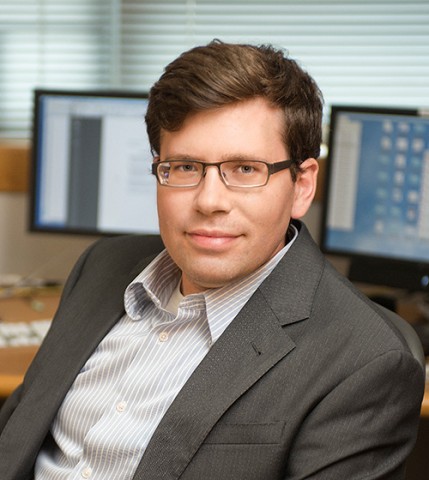 Early last fall, the Federal Circuit rejected a request from Google to move a patent infringement case involving Google’s YouTube service out of East Texas. The request, formally known as a writ of mandamus, is an attempt at judicial remedy by petitioning an appellate court. In this instance, Google was claiming that East Texas wasn’t the proper venue for the lawsuit.

There has been an uptick in the filing of petitions for writs of mandamus in recent years, particularly in Texas courts and in cases involving big tech. Jason Rantanen, a professor at the UI College of Law, spent his Fall 2020 Obermann Fellow-in-Residency collecting and analyzing data about such cases. Rantanen, whose research area is intellectual property, specifically patent law, wants to help ensure that such cases are being decided objectively.

This particular Google patent infringement case and many like it seemingly should have been heard in Northern California near the tech giant’s home base. But there has been an attempt by the parties filing these cases to get them tried in two districts in Texas that are believed to be friendlier to patent owners.  Sometimes these cases, including the argument for transferring or retaining them in a particular jurisdiction, are accompanied by what appears to be empirical research by junior attorneys.

The problem, says Rantanen, is that it’s not.

“The centralization of patent infringement lawsuits in Texas is a relatively new phenomenon,” Rantanen says of these patent infringement cases, as are the aggressive attempts to move them (which, like the aforementioned Google case, are often denied). Several petitions for rehearing by the full appellate court have been filed in the last year. “This issue could percolate up to the Supreme Court,” he notes, partly on the insistence of that so-called empirical research.

Such research occurs via Westlaw, the preeminent legal research service, which includes more than 40,000 databases of case law, state and federal statutes, codes, public records, legal forms, and more. This impressive panoply of information appears straightforward, a descendant of some of the earliest HTML programs that graced what would become the Internet. The problem, says Rantanen, is that Westlaw is set up to help practitioners enhance their arguments; it is not set up for empirical research.

This isn’t surprising, given that there are tens of thousands of attorneys all over the world who work in intellectual property and patents—a very profitable and high-stakes area with decisions frequently involving millions and billions of dollars. On the other hand, there are about fifty law professors who conduct empirical research on intellectual property law decisions. These researchers don’t just focus on individual cases; they also use distance reading to identify patterns across large numbers of patent decisions.

Historically they’ve done so based on a platform intended to help attorneys win cases, which is problematic. They’re all looking at the same ingredients but intend to create completely different dishes. Making things even more difficult, Westlaw periodically updates its search interface, which means that a search that was the basis of research before that time may no longer be replicable.

Rantanen is working to remedy this by creating a research set that is created for researchers, not practitioners. It’s a slow going and multi-layered project that has required him to learn some coding and become comfortable with complex and repetitive work. In short, it has been a perfect project for quarantine.

When Rantanen, who directs the UI’s Innovation, Business, and Law Center and co-authors the popular blog PatentlyO, applied to be an Obermann Fellow-in-Residence, he’d intended to spend the semester working on a project about societal perceptions of patents. It’s a project that’s dependent on interviews and conversations with a wide range of people—circumstances that became less available and also less appealing during the pandemic.

Nonetheless, Rantanen was able to use his involvement in the Obermann bi-weekly seminar with scholars from diverse fields to continue thinking about this project. He’d already completed some interviews with people in the sciences about their understanding of patents. “I wanted to keep looking at university researchers and what they think patents are good for, and perhaps their role in hiring decisions,” he explains. But the input of the other Fellows changed his mind: “My focus is now less on what scientists think and more about what other people think.”

As someone whose work is based on being able to communicate patents—their uses, benefits, and the many ways they affect our world—Rantanen says that this qualitative information offers him invaluable insight into how people understand and think about the world he’s enmeshed in all the time. While we often think of a patent as “a cold document without personal stories, like a business transaction,” Rantanen insists that they are imbued with personal meaning and have emotional components. “They can inspire and incentivize people,” he says, not unlike earning a diploma or seeing one’s name on a house deed or marriage license.

Not a cold equation

It’s this emotional element of patents, he believes, that gives them their power to inspire: “If we just think of a patent as a cold equation, then we lose what excites and spurs innovation. If a corporation can get a patent instead of individual people, then we remove the human side of it.”

Although a U.S. patent must be issued to an individual or team of individuals, in the past decade it has become easier for corporations to file for patents on behalf of their employees. And as giant entities, such as large research universities, become embroiled in legal battles for the rights to millions of dollars, Rantanen wonders what happens when humans are no longer “at the heart of it.” Already, he says, there has been a test application for something invented by AI. Whose name goes on that patent?

The two projects seem quite different at first glance. One is a distant reading of mass amounts of data; the other asks people to share their emotional responses. But both get at Rantanen’s desire for patents to serve people, to be effective tools for individuals. As he scoops up and combs through writs of mandamus, he seeks to find out who is appealing patent cases and why. We know a lot about the outcomes of these cases, he says, but we don’t know much about who is actually requesting and to what end. When we find that out, we’ll have a better understanding of patent litigation—especially the people and companies willing to litigate their cases to the end.