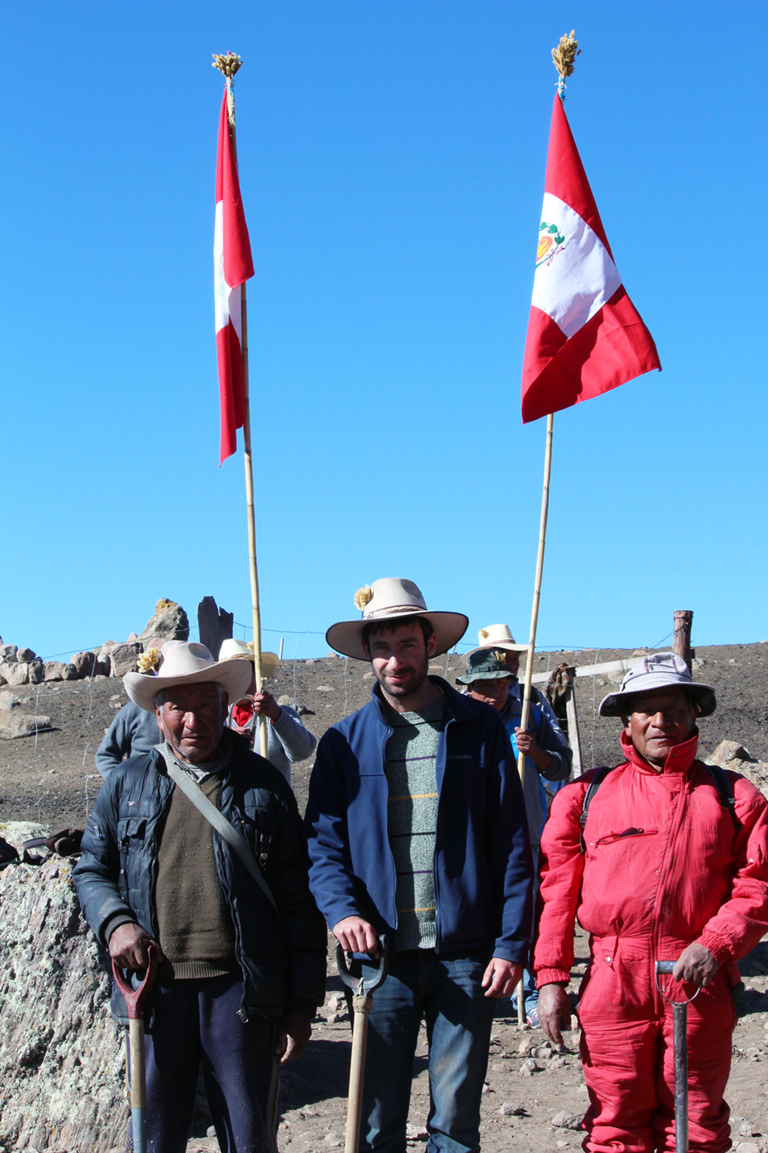 Climate change is nothing short of a disaster for farmers in the Peruvian Andes. As one put it in a 2017 interview, “If the glaciers disappear, we’ll have to die.” With droughts becoming more frequent, Andean farmers are struggling to irrigate their crops and water their livestock; unpredictable weather has changed once-reliable patterns of plant growth; and occasionally, a “glacial lake outburst” sends a tsunami of melted-glacier lakewater into villages downstream.

Eric Hirsch, a professor of Environmental Studies at Franklin & Marshall College in Lancaster, PA and a Spring 2021 Obermann Fellow-in-Residence, has conducted ethnographic fieldwork in the Peruvian Andes for the past thirteen years. Fluent in Spanish and conversant in Quechua (the indigenous language spoken in the highlands), he has interviewed farmers, herders, sustainability professionals, local leaders, and national policymakers there; attended meetings of water and local governance boards; and labored with villagers in Andean farm fields. He used his time as an Obermann Fellow to finish writing his first book, Investing in Indigeneity, and to begin research for a future book project, Neoliberal Adaptation: Climate Change and the Reinvention of Development in Peru. (A personal connection brought him to the UI for a semester.) Drawing on his fieldwork in the highlands, he argues that 21st-century climate change adaptation projects repackage the promises of a development paradigm that, for over two decades, has sought to inculcate the ideals of individualized entrepreneurship in the region.

Hirsch is broadly interested in the relationship between environmental change and economic development—in his words, “how people feel and practice economic growth on the ground level.” For Neoliberal Adaptation, he’s studying how adaptation initiatives that tend to center entrepreneurship and individual action articulate with other local ways of knowing and responding to environmental change that don’t necessarily depend on capitalism’s markets, profits, and growth. In the Colca Valley, a river valley in southern Peru, where some locals maintain their pre-Inca ancestral roots and traditions of mutual support and where many more value collective solidarities, entrepreneurship can be a fraught concept.

Peru is one of the countries most vulnerable to climate change—particularly the highland, arid Peruvian Andes, where frequent droughts are decreasing the already-scarce water supply. Though Peru has publicly committed to helping curb global climate change, the country is also weighing how to balance limiting emissions with its recently expanding emissions-intensive industrial development. What has become clear is that today, much of the burden of climate mitigation and adaptation is being borne by individuals. State-sponsored and NGO sustainability projects are taking up the call to individualize resilience with programs in eco-friendly tourism entrepreneurship, environmental education, composting and recycling best practices, and projects to improve livestock genetics. These can have the effect of transferring the burdens of environmental change to individual citizens by tasking them with finding ways to grow the economy beyond agriculture. Other initiatives encourage people to take out loans and start small, sustainability-oriented businesses specializing in everything from organic cash-cropping to solar panel installation and eco-tourist accommodation. 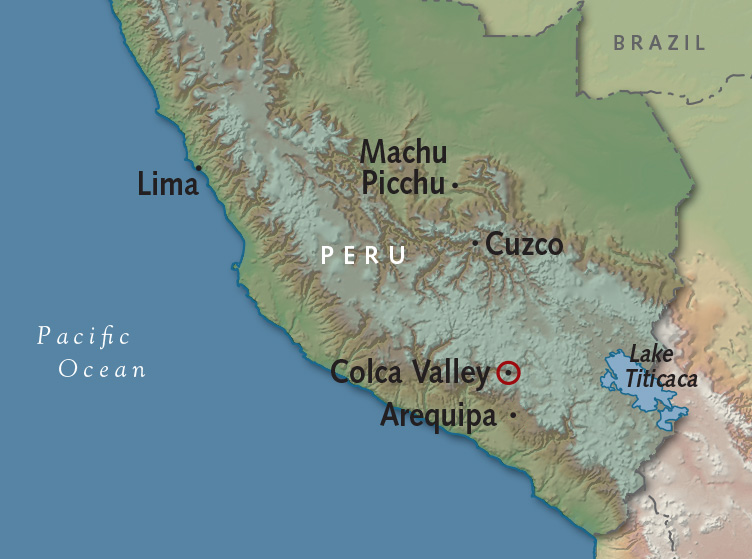 The Andean region, writes Hirsch, “is famous among historians, anthropologists, activists, and policymakers as a place where reciprocity and collective solidarity have long organized aspects of economic life.” Scholars don’t exactly know why. “It could be the region’s water precarity that originally invited a sense of shared duty,” speculates Hirsch. Or, he says, it might stem from the Incas’ system of mass patronage, wherein leaders extracted a certain amount of manual labor from citizens, and the citizens, in return, expected certain services from their leaders. Or it might be due to the simple fact that planting, growing, and harvesting is much more joyful when it is done alongside kin, friends, and colleagues.

Recently, however, many state agencies and NGOs have encouraged entrepreneurship by arguing that practices of interdependence cause poverty and hold the villagers back economically. They market the ideology of individualized resilience through public life, media, local symposia, local public events, market fairs, and contests, using empowerment messaging, much of it geared toward young people and women.

Most Colca Valley residents engage in some way with flows of capital, and many also try to build entrepreneurial lives, motivated by the prospect of reliable income. The problem is when this is offered to people as the only pathway to economic stability. Many state- and NGO-sponsored programs offer free business training to would-be entrepreneurs, along with low-interest lines of credit—but in many cases, neither is sufficient. “I interviewed one woman,” Hirsch recalls, “who went bankrupt and had to move after starting up a gift shop in the market town. It was really hard for her; she didn’t have enough credit to run the business, but also didn’t have an alternative way of making a livelihood.” He says that other villagers lost their livelihoods after building tourist structures and museums that were destroyed by a 2016 earthquake. The current COVID pandemic is deepening the struggle for those who came to depend on tourism income and the region’s new service industry.

Their communities see these failures, of course, and become even more skeptical of individual entrepreneurship as a solution to employment and environmental crises.

There’s a local activist tradition in the Colca Valley that, Hirsch says, “has long called capitalist styles of individualism into question and emphasized regional autonomy.” Andean villagers regularly critique individualized entrepreneurship in subtle ways—for instance, by pressuring loan officers to transform a one-off line of credit or grant into a long-term reciprocal relationship: “They directly ask the NGO or state programs for more help, more commitment.” Or, he says, they voice their resistance in public forums, like periodic local entrepreneurship competitions, where development agents form a captive audience. NGO leadership and state program officials take these critiques seriously, he says, “but who knows if they have any effect at the top of the organization. It’s the big challenge of structural change.”

In the (quinoa) field 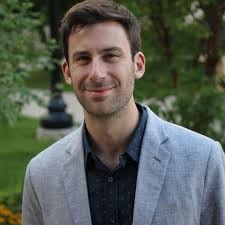 Hirsch first visited the Peruvian Andes as an undergraduate, studying literature and history in Cuzco through the School for International Training. Then, as a PhD student at the University of Chicago, he conducted research in the Colca Valley for 15 months; that’s when he first met Doña Luisa Cutipa and Don Gerardo Huaracha, his longtime host parents. Now in their 80s, they continue to manage their ancestral farm, growing quinoa, fava beans, and maize with the help of extended family and hired hands. Nearly every summer until the pandemic, Hirsch has returned to the Colca Valley to conduct fieldwork, staying with Luisa and Gerardo and following their schedule—waking up early, going to the agricultural fields, and helping to till fields, plant seed, or harvest crops alongside donkeys and alpacas. Some days, he also visits NGO and state government offices, sits in on meetings about various sustainability projects, or interviews local officials and villagers.

Working in the farm fields not only allows Hirsch to observe first-hand the experiences of local farmers, but it has also changed his relationship to the local community. Instead of feeling like—and being treated like—an outside researcher there to collect data and leave, he has developed real long-term friendships and ongoing conversations with members of the community. Earning trust is especially crucial for ethnographers working in communities with a traumatic colonial history like the Colca Valley, where people still face significant structural racism and strong anti-rural prejudice. To conduct culturally sensitive, responsible ethnography, Hirsch says, “You first need to learn the basic aspects of the history, traditions, present-day and local political situations of the community you’re studying.” You also need to be self-aware, he indicated, of the immense power and privilege you bring to the space. This power asymmetry can’t be undone, as a lot of recent scholarship in anthropology has observed. But it can be channeled in respectful ways like developing research questions that are sensitive to local projects, instead of coming in imposing a predetermined vision of what the research will look like. Then, on the ground, Hirsch suggests, “be attuned to the ways that people are good guests in the area. Take up space in a way that’s really sensitive to what people are doing around you.”

Hirsch is currently working on the initial writing for the Neoliberal Adaptation project, hoping to submit a new article related to the project later this year. Ultimately, he says, “I hope to contribute to broader policy conversations about how we might reimagine the role of government, economy, and community in the face of crisis.” In Fall 2020, he gave a public lecture for the UI Department of Anthropology, “The Adaptation and the Response: Localizing Climate Geopolitics in Peru.”

Though his residency at Obermann was virtual because of COVID, Hirsch says the biweekly fellows’ seminars provided welcome routine and connection with other scholars. “One strength of the Obermann Fellowship that will stay with me,” he notes, “is our particular group's emphasis on writing in ways that make the humanities publicly accessible and exciting to read. The conversations really motivated me to reimagine academic writing, at its best, as the telling of unconventional stories that are also inviting to all sorts of educated readers.”

Top photo: Hirsch (center) with his host father, Don Gerardo Huaracha (left), and his brother, Silvestre Huaracha (right) at the annual communal irrigation canal cleaning in the village of Yanque.