Summer Interns at the Halfway Mark: A growing tomato, a gift from Brokaw, and nudity in the archives 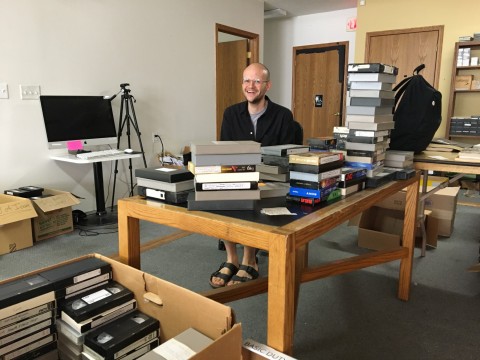 It is around the halfway point of so many projects when the work is most difficult. The newness has worn off; the end is still out of reach, but close enough to give us an uneasy reminder of how much is yet to be completed. This is the experience of the ten UI graduate students who are at the midway point of their Humanities for the Public Good (HPG) internships. For eight weeks, they are working with community non-profits and University of Iowa units on projects that include archival organization, data collection and analysis, storytelling, and website development.

This is the third summer of the program, and every year during this midway point, many of the interns express feeling overwhelmed. Their work plans are in place, they've attended several staff meetings, and they've spent time with materials at their disposal. Now it's time to actually create something: a podcast episode, a public program, a series of informed recommendations, or something else entirely.

As part of his HPG internship, Dominic Dongilli (American Studies and GWSS) is sifting through boxes of correspondence and VHS tapes that Public Space One recently inherited from Public Access Television (PATV). Dongilli (pictured above) is tasked with creating an archive that can serve multiple community purposes, including organizations and individuals represented in the recordings and artists who might utilize the collection to develop new works. After spending several weeks performing an inventory of the paper, digital, and AV materials, Dongilli has found several gems, including a 1995 kerfuffle over a program titled “Exile on Stupo Street: Porn No. 5" that included nudity and led to allegations of censorship. [The HPG interns contribute to a blog, and Dongilli wrote about this incident in his first post.] Currently, Dongilli is making recommendations about how to organize the burgeoning archive. Lindsay Mattock, director of the School of Library and Information Science, advised him on how to define the scope and intent of the project. Her visit to the PATV office in late June was mutually beneficial, with Dongilli gaining crucial tools to make his process clearer and more efficient, and Mattock discovering a previously unknown community resource. As Dongilli wrote, "We have a collection of papers that [Mattock] wants to revisit for her own research. And the SLIS department is looking for media-based archive opportunities for their students, and it's very possible that they will be able to rotate in and out of this project." Read his full blog post.

While HPG internships provide UI graduate students opportunities to learn and try on skills that might become part of future work—John Tappen (American Studies), for example, is learning about podcast production via the Iowa Labor Oral History Project—other interns are experiencing the realities of the non-profit world, which tends to move more quickly than academia. At two sites, students' mentors moved on to new positions, offering the interns at those sites an internal view of how organizations shift when a team member leaves. Another internship site is in the midst of building a strategic plan that will publicly shift the focus of its work. Although strategic planning is not central to the work of the intern at that site, she has been invited to sit in on the meetings—a rare and invaluable experience.

As often happens at this point during HPG summer internships, several of this year's interns are reassessing their relationship to their current degree program and professional trajectory. Do they want to stay on the PhD path? Could they shift the focus of their dissertation to include other voices or to be more public-facing? Is there something else they are meant to be doing? Such questions have emerged each summer and create an opportunity for the cohort to reflect with like-minded peers and informed mentors.

"One thing that I’m finding is that I really enjoy community-based, or ‘boots on the ground’-type learning much more than the traditional classroom setting," writes Aja Witt (Journalism and Mass Communication), who is working at the Iowa City Area Development group on a project about BIPOC-owned businesses. A native of Waterloo who has lived in Iowa City for nearly a decade, Witt is unsure where this realization will take her. The people she's interviewed this summer and the mentoring she's received have fine-tuned her understanding of the relationship between economic development and social justice. "I feel like I’ve learned so much over the past few weeks," she adds, "and I’m excited to see how my newfound knowledge can be put to use." Read Witt's blog post. 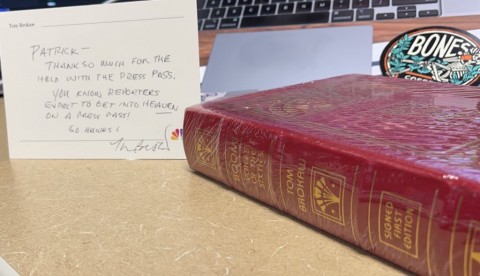 Patrick Johnson (Journalism and Mass Communication) is working with a collection of press passes gifted to UI Special Collections by alumnus Tom Brokaw. The esteemed reporter's book Boom! Talking About the Sixties influenced Johnson to become a journalist. After weeks of doing solo work in the archives and wondering whether he was more of a humanist or a social scientist—struggling with which route should dictate his future graduate studies and research—he received a serendipitous gift from Brokaw: a signed first edition of that very meaningful book. "The notes [Brokaw] wrote me outside of and inside of the book were further affirmation that I'm doing something right," reflects Johnson, who plans to interview Brokaw for an upcoming exhibition. Read Johnson's blog post. 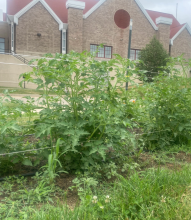 Although the internships are eliciting questions and quandaries for some, they are also producing a much needed and valued experience: joy. Tyler Snelling (Communication Studies) has experienced one of the great benefits of in-person summer internships—connecting with nature. Specifically, he has been involved with growing (both literally and figuratively) a heritage farm at the National Czech and Slovak Museum in Cedar Rapids. His project is to develop programming about food insecurity in the eastern Iowa corridor, using the garden as a focal point. He visits the garden every week, which has allowed him to get his hands in the dirt and follow the progress of the tomatoes. The entire cohort delights in the photos he shares that capture life springing forward! Read Snelling's blog post.