In the U.S., where the terms lawyer and attorney refer to a legal professional, it can be easy to forget that advocate is the term more widely recognized across cultures. The word comes from Roman law and the Latin advocatus, “one called to aid (another); a pleader (on one’s behalf).” The training of advocates also goes back to the Roman Republic, when it was deemed useful to have people outside the priesthood trained in rhetoric and reasoning. 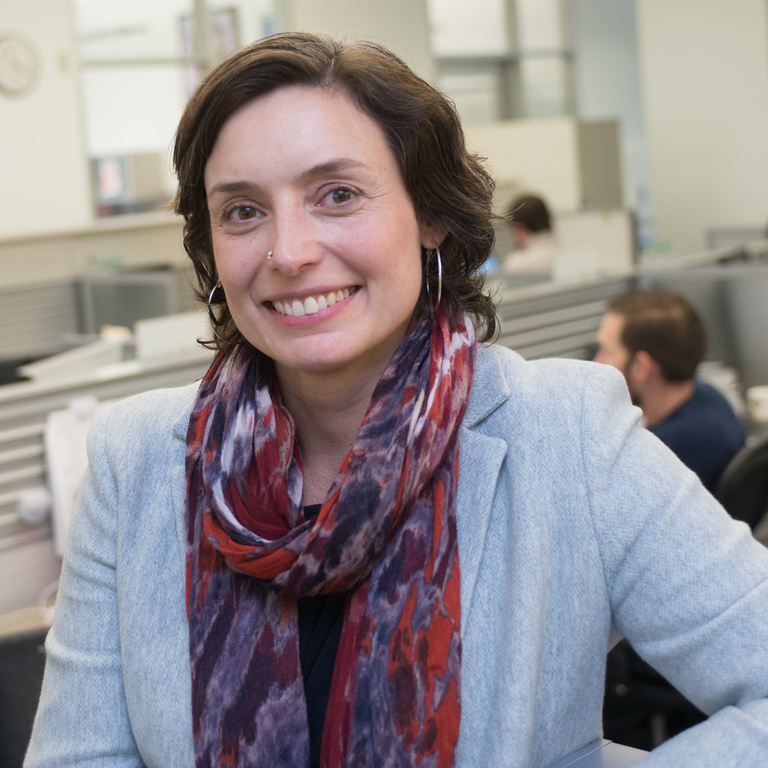 To this day, law students receive extensive training in oral and written advocacy. During three intensive years, they are taught how to make clear and concise arguments in both formats. But what about communication through images? Daria Fisher Page, a professor in the UI College of Law and a Fall 2021 Obermann Fellow-in-Residence, believes that today’s legal professionals also need training in visual advocacy.

While images increasingly make an appearance in legal briefs, immigration applications, closing arguments, and other legal documents and actions, law schools don’t prepare students for this form of communication—either to produce it or to critique it. “Beyond standard, twelve-point Times New Roman, most lawyers are not very comfortable with design,” says Fisher Page.

As the director of the Community Empowerment Law Project Clinic, she’s seen how this hampers her students. In this legal clinic, UI students represent a client—often an organization—whose mission is to strengthen communities, create economic opportunity, and advance social justice. During the course of a semester, they work on a specific project for their client, such as strategic planning or coalition building. In the field, this work is understood as “movement lawyering.”

Last year, the clinic took on a project with a diverse coalition of organizations that was trying to reform the process of and policy related to commutation for individuals sentenced to life without parole. Part of the law students’ challenge was to help the coalition make a public case for their argument in order to create change at legislative and regulatory levels. This advocacy included creating one-page documents for legislators and recommending ways to expand the coalition via social media. In both instances, says Fisher Page, strong visuals are necessary to make an effective impact.

A necessary legal tool in a visual culture

To advocate on behalf of another in the twenty-first century, one needs visual skills. “I provide my clinic students a two-hour workshop about issues like white space, how people interpret a color photo versus black-and-white, font choices, and how to read images,” she says. But this is just scraping the surface. In a culture where the visual dominates—social media and Netflix capture more of our collective attention than do books or articles, much less oral debates—anyone tasked with making an argument or transforming opinion must be able to nimbly play the visual game.

In the area of movement lawyering, visual advocacy is uniquely tied to systemic change. “Because of their potential to influence an audience,” Fisher Page has written of images, “advocates should not only be trained in how to use images effectively, but how to use them responsibly and ethically in their work.”

Emily Schott, a recent UI Law School alum and one of Fisher Page’s former clinic students who is now a labor and employment lawyer in Cedar Rapids, says, “We are an aging profession, and there remains a belief that if you’re not spending all day reading or writing briefs, you’re not doing your job.” Many in the profession view visual advocacy as below them; however, Schott sees the ways in which attorneys who can deftly use visuals to make their cases have an upper hand, because opposing attorneys and judges likely won't have the skills to effectively critique the visuals or make a rebuttal.

Fisher Page’s project is three-pronged. She is researching the history of visual advocacy, writing an article that articulates the need for a pedagogy of design and visual advocacy, and creating a course on the history and design of visual advocacy in social justice movements and movement lawyering. The project evolved from watching her students struggle with basic design decisions. When they had the opportunity to work with professional graphic designers, they tended to defer to the person’s decisions in ways that weren’t always in a client’s best interest. “There are basic skills that law school hammers out of you,” says Fisher Page, who majored in art history as an undergraduate, “and this is definitely one of them.”

While some of her students are resistant to or afraid of the design workshop—“I’m not an artist!” is a common refrain—others, she says, “are so excited to use this part of their brain again.” Considering colors and fonts, designing legible charts, and providing input on effective logos matter more than many lawyers want to admit. Giving students permission and guidance to do this is imperative.

“One thing I most appreciated about the clinic,” recalls Schott, “is that Daria paired us with graphic design students to help create our final deliverable for our client. This could be the slide deck template for a PowerPoint presentation or a cover design for a report.” The relationship is intended to help students navigate decisions and communications with a designer.

Fisher Page gained a lot of faith in the power of working directly with designers when she had two clinic students who had worked in graphic design and marketing before attending law school. One was part of a team assisting the start-up of a new nonprofit that was focused on helping low-income students attend college or a vocational program. “We were offering wrap-around services, including establishing 501c3 status and creating introductory materials.” In order to make sense to potential board members or donors while maintaining an invitational tone, good design was paramount.

Symbols extend beyond disciplines or borders

Now that she’s in the workplace, Schott says she most frequently uses her visual advocacy skills with her clients—workers who tend to come from the blue-collar sector. Ultimately, the decision of which route to pursue in a case is up to them, which means it’s her job to explain things as clearly as possible. Drawings and charts, even the most cursory ones, can aid immensely in translating the complexities and trajectories of a case.

This speaks to a fact that many in the legal profession might resist: effective visual advocacy needn’t be slick. Just last week, Schott watched as a lawyer in a high-profile case created a quick drawing on a large piece of paper, held it up for the judge to see, and basically punctured the opposition’s seemingly impenetrable piece of evidence.

Visual advocacy is an area that by nature extends across disciplines, relying on the arts, communication studies, and other areas that consider the visual world. As an Obermann Fellow sharing her work with other faculty during bi-weekly seminars, Fisher Page is reveling in thinking with colleagues far afield from Law. Megan Gilster in Social Work, who has done work on framing social movements, has provided valuable feedback, while Al Martin from Communication Studies has shared his research in semiotics. “Being able to talk to people who don’t have the same skepticism about the subject as a legal audience has been extremely helpful,” says Fisher Page.

Part of her research this semester has been to delve into the background of social movement symbols and to create a bibliography of recognizable ones. “I want people to understand why this is worth teaching,” says Fisher Page, noting that "BLM," "#MeToo," and "99%" are recognized internationally. These movements, which have advocacy at their cores, cannot be understood in twelve-point Times New Roman font. In Fisher Page’s future, the logos, color palettes, and pixels that make these movements so iconic will be understood with ease by the lawyers who choose to advocate for them.