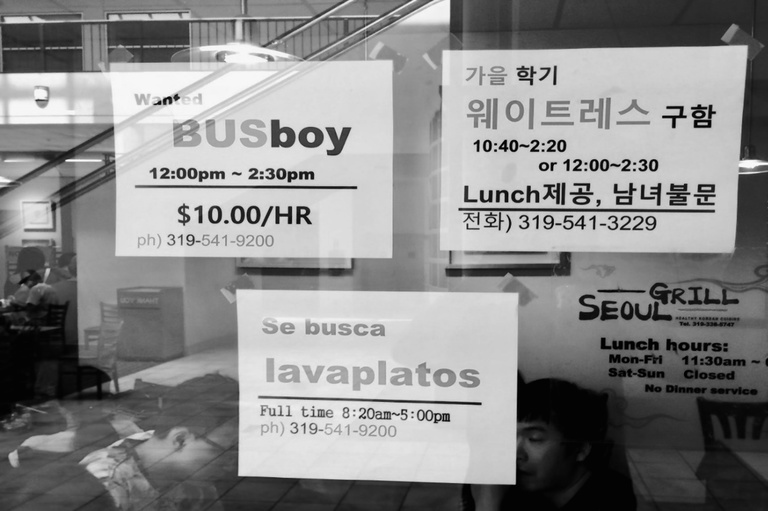 A local restaurant posts a help wanted ad for a dishwasher in Spanish, while server positions are advertised in Hangul (Korean). A teacher encourages students to write in the language of their lived experience, using their multilingual resources. A government nullifies Anglicized words from formal communications. A parent tells her children she won’t tolerate violent language. Each of these is a form of language policy.

According to David Cassels Johnson, Associate Professor in the Department of Teaching and Learning in the University of Iowa’s College of Education and a Spring 2022 Obermann Fellow-in-Residence, “Language policy is any policy that governs the structure, function, use, or education of language.” Each of us is living under numerous language policies. Some at the macro level are decided by institutions; others are created less officially by circles to which we belong. We even make language policies for ourselves when, for instance, we choose not to use some kinds of language or to amplify others.

Johnson, an educational linguist, is particularly interested in how language policies “affect educational opportunities for students who speak minoritized languages and dialects.” This can occur via structures, such as the anti-bilingual education laws that were passed in multiple states in the 1990s and early '00s. Or it can occur via function, which alludes to the language we adopt for various places and situations and is less explicit than structure. An example of function is the way in which many language arts teachers correct the grammar of students who use nonstandard forms of English.

“I am intentional in using ‘minoritized,’” says Johnson of his definition, “because policies have been enacted in order to purposefully minoritize or eradicate [speakers of certain languages].” Locally, for example, the language of the Ioway or Baxoje people was dominant, just as other indigenous languages were the primary mode of communication prior to being outlawed and even obliterated. (According to the U.S. Administration for Native Americans, 65 Native languages are already extinct, and another 75 are near extinction.) “Language policy is often attached to other kinds of genocidal policies,” says Johnson. “When the head of Indian Affairs says we need to get rid of ‘barbarous languages’ and put kids into boarding schools where they’re forced to speak English, this goes hand-in-hand with other ways in which European colonizers obliterated Indigenous people.”

Johnson, who also has a visiting faculty position at Shanghai International Studies University, is currently working on multiple projects, including a five-year, $2.2 million grant project funded by the U.S. Department of Education. "Advocacy, Capacity, and Collaboration for English Learners in Iowa (ACCEL)" was awarded funding in 2016 to improve instruction and support for English language learners (ELL) by developing training for K-12 pre- and in-service teachers. The project recognizes that the population of ELL students in Iowa has grown by 250 percent in the last two decades, with numbers still on the rise.

As an Obermann Fellow-in-Residence, Johnson is especially focused on two projects, the first of which is in early stages. Harkening back to the example of the "help wanted" ad, Johnson is interested in how images, including signs, cartoons, advertising, and even graffiti, are used to deploy language policy. That "help wanted" sign, which Johnson photographed at Iowa City's downtown mall, doesn’t state a formal policy, and yet it—and other visuals—makes clear assumptions and preferences about language. People who speak one language do this kind of job; another kind of language speakers are suitable for a different job. There are multiple kinds of signaling going on via these visual cues, all of which normalize ideas regarding hierarchy of roles and economics.

Johnson's other project is more theoretical in nature, focusing on the concepts of structure and agency in language policy. How much agency do humans have within larger societal structures, and how do the processes of agency and structure relate to language policy? “Agency is talked about as a good thing,” says Johnson, noting that we want teachers to have agency and to be able to make decisions beyond policy, while “structure is often portrayed as nefarious.”

Among the burgeoning bilingual programs in Iowa and around the country, he thinks the opposite is truer: teachers have a lot of agency but lack the resources and support that structure can provide. Structure in the form of an official office or law could provide funding, training, and oversight. Because Iowa is intensely local in how pedagogical decisions are made, it serves as a ripe example for studying the tension between agency and structure.

In this project and all his work, Johnson wants to leverage language policy to promote social justice for marginalized language users by way of resources and opportunities. Not surprisingly, language policy is a deeply interdisciplinary area of study. It coalesced when linguists were called on to help make decisions and create policy about the status, structure, and use of multiple languages. Which languages would newly formed governments adopt? Which would be taught in school?

Today, language policy includes scholars and policymakers from economics, anthropology, political science, education, and linguistics and tackles such issues as the economic benefits of a country's adopting English as its primary language—a choice long viewed as an economic boon, but one that has been exaggerated, according to research. As our schools adapt to increasingly diverse student populations and become more attuned to student-centered learning, language policies can either be transformative or recalcitrant. Whether through structure or function, language policy signals different beliefs about learning and achievement. This opportunity for change excites Johnson, who asserts, “Social justice and equal opportunities for kids is what drives me.”