The words "slavery" and "tourism" don’t seem like they belong anywhere near each other. But a growing number of Americans of all races are eager to better understand our country’s complicated history by visiting places where difficult and often darkly violent events occurred. Ensuring that we, the touring populace, receive complete stories when we arrive at these spaces, a network of historians, anthropologists, and community activists are working against time to save the material remnants of the lived experience of enslaved people.

An absence in heritage tourism

Among them is Jodi Skipper, a University of Mississippi professor of anthropology and southern studies. For the past decade, she has used tools as an archaeologist, scholar, teacher, and community member to widen and deepen the shared narratives of historic sites in the U.S. South. She has shared these experiences in a new book, Behind the Big House: Reconciling Slavery, Race, and Heritage in the U.S. South, just published by the University of Iowa Press.

One of the first graduate courses Skipper taught when she began working in Mississippi in 2011 was about cultural heritage tourism, of which the South has a strong tradition. Beginning in the 1930s, garden clubs in Natchez, Mississippi—a small city known for its antebellum mansions—hosted an annual “pilgrimage” to entice visitors to experience a bygone culture. This annual event continues today, promising “a musical pageant with dancing, historic scenes, and elaborate period costumes.” Natchez became one of the first cities in the country with a tourist-driven economy, long before most communities aimed for such designation.

In recent decades, tours have sprung up that focus more on the Black American experience, themed around the civil rights movement or the blues. But Skipper quickly realized that the stories of enslaved people were absent from these tours, festivals, and other tourist opportunities dedicated to the pre-Civil War era. When people visited the grand homes and beautiful gardens in Natchez and many other communities, what went unspoken was the fact that these places had been created by an economic system with forced human labor at its core. Similarly unacknowledged was the fact that the contemporary white owners of the homes and nearby businesses were the ones prospering from tourist dollars.

It didn’t take long after her arrival in Mississippi for Skipper to find a way to share silenced stories through a program called Behind the Big House. The project was the brainchild of Chelius Carter and Jenifer Eggleston. The couple had purchased a historic home in the small town of Holly Springs, about forty minutes from the University of Mississippi campus. After discovering a detached kitchen on their property, they recognized that it had likely been a former slave dwelling. Carter and Eggleston, who work as a preservation architect and a National Parks Service grants writer, respectively, knew the site needed to be saved. And shared.

They reached out to owners of similar properties in the area and started an annual tour they called "Behind the Big House" with a mission “to interpret the lives of enslaved persons through the former slave dwellings that are hidden in plain view.” Because many former slave dwellings have either been readapted or allowed to deteriorate, obscuring their original use, Carter and Eggleston also hoped the program might yield funding for preservation.

In her book, Skipper shares the journey to preserve these places and the collaborative network at the heart of the movement. She also gives examples of how she involved her classes in the preservation efforts in Holly Springs via applied assignments, such as having students serve as docents and assist in public excavations. Just as importantly, she doesn’t hesitate to expose the effects of this work on her career.

The sixth book in the Humanities and Public Life series, a collaboration between the University of Iowa Press and the Obermann Center, Behind the Big House is an autoethnography, part ethnography and part memoir. Skipper begins with her upbringing in a Black Creole community in Louisiana and quickly moves to her training as a graduate student at the University of Texas in Austin, where she learned to do publicly engaged work from activist scholars. Writing of her decision to weave her personal narrative with those of the places and people central to her professional project, she says: “I was compelled to critically think about how my identity as a descendant of countless enslaved people and my experiences as a Black woman, as a U.S. southerner, and as an activist anthropologist could influence how I do academic work in ways that make that work accessible to racially diverse communities.”

Skipper is clear about her desire for the book to reach other Black women scholars. She notes that too many colleagues and friends left her institution because they were exasperated and exhausted by empty promises and an intractable culture that turned a blind eye to Confederate traditions. The community-based work described in the book did not help to move the wheel of institutional change as much as she’d hoped, but it has provided her with a counterweight to institutional malaise by offering a “more nurturing environment.”

One area in which the landscape has changed significantly since Skipper started working in Holly Springs is interest in former slave dwellings and similar sites. There had not been tourist sites designed to focus on slavery when Skipper moved to Mississippi. Since then, the Whitney Plantation in Wallace, Louisiana, and the McLeod Plantation in Charleston, South Carolina, both opened.

Skipper has gained national recognition for her work in Holly Springs. She has developed and leads workshops about best practices for interpreting slavery and related sites that attract teachers, preservationists, and academics. By connecting with another public archaeologist, Jodi Barnes, the Behind the Big House program has extended into Arkansas. Just five years into her work in Holly Springs, she was awarded a 2017-18 Whiting Public Engagement Fellowship—an award for “ambitious, often collaborative projects [that] infuse into public life the richness and nuance that give the humanities their lasting value.” 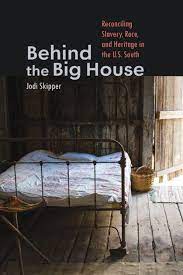 Writing of this work, Skipper says, “I became a better activist but a less tenurable academic.” Viewed as “service” by the university, her efforts to help preserve the remnants of the lived experience of enslaved people; to train students to understand these stories via work related to the areas of archaeology, anthropology, and museum studies; to share best practices via a well-researched curriculum; and to create deep connections with a nearby community did not count toward her tenure. Now in her second decade as a faculty member, this book is partly an attempt to provide mutual aid to younger scholars, to help them learn to advocate for their work and negotiate the thorny terrain of publicly engaged research and teaching.

In the book's final chapter, Skipper reflects on the activist scholars she’d studied with in graduate school. She was inspired by their work but didn’t understand what it “looked like for them as faculty on the ground.” The work of making an academic career had not been spelled out to her, something she is keen to correct.

“Activist scholarship assumes that I, as a researcher, must heed the knowledge of those with whom I collaborate, regardless of how well educated and steeped in ‘authoritative knowledge’ I might think I am,” she writes. “This shared authority takes time. What I didn’t realize is the fact that my work might have value to community groups...but little to no value ‘to the academy.’”

In his blurb for Skipper’s book, the author Kiese Laymon says the work “has the heart of a gorgeous memoir and the bones of our most evocative scholarly texts.” He continues, "[Skipper] chronicles superbly what it means to make, destroy, and really rebuild a region’s history.” Throughout the book, this rings true—the making of the connective tissue that is essential to collaborative work, the destruction necessitated by dismantling assumptions and biases, and the building that is needed at the level of institutions, communities, and nations.

On Thursday, April 21, from 3:00 to 4:30 pm CT, Skipper will share her newly published book and the Behind the Big House Project. She will be joined by two other speakers:

This virtual event is free and open to all. Registration is required.

Read more about the book and order a copy at the UI Press website. Get 25% off through May 29 with code BHB25.