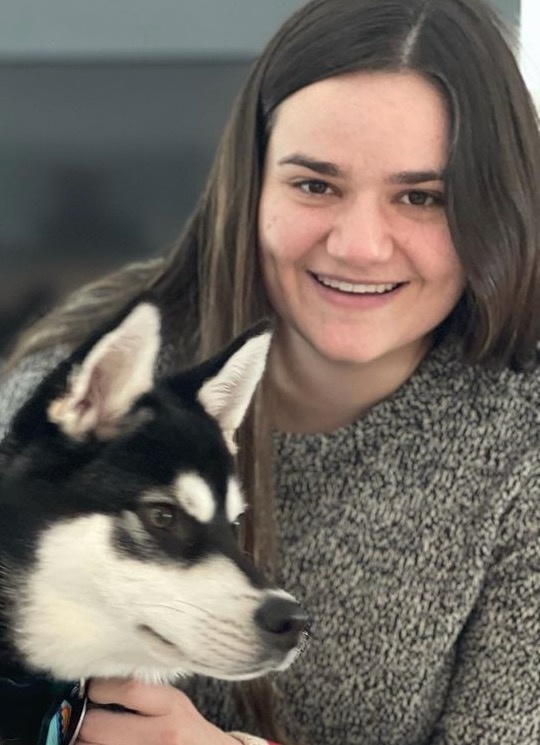 As part of its support for the Anne Frank Tree Planting Ceremony, the Obermann Center provided funding to Emma Silverman, an MFA candidate in the UI Playwrights Workshop, toward completion of Silverman's thesis play. Emma performed an excerpt from Stars and Stones at the Tree Planting Ceremony last Friday. The play will be staged in its entirety this Thursday, May 5, 2022, as part of the UI's New Play Festival. (See ticketing details at the end of this article.)

Silverman is the recipient of a Marcus Bach Fellowship, an award given by the UI College of Liberal Arts and Sciences, to support the completion of an MFA project or doctoral dissertation, particularly work that fosters intercultural communication and/or the understanding of diverse philosophies and religious perspectives. Silverman intended to use the award toward direct research of Holocaust tourism.

Although the pandemic curtailed some of her travel plans, she was able to visit Poland in October 2021. "I visited museums, former Jewish Quarters, synagogues, and the Auschwitz/Birkenau complex," she says. "Traveling alone by train through Poland as a Jewish woman was a transformative experience. I left Poland with a pile of research, a detailed journal, and a slew of questions about Jewish identity, American anti-Semitism, and the most—and least—effective forms of remembrance."

This experience anchors Stars and Stones, Silverman's autobiographical play about reckoning with ghosts from the past and apparitions of the present during and after the main character's research trip to Poland. This character is launched back and forth through history, "forced to consider the nature of her project while a scattering of strangers embark on their own moralistic journeys."

Silverman has been a member of the Anne Frank Tree Planting team this year, helping to plan events around last week's celebration of the new sapling on the UI Pentacrest. Her connection to Frank's story comes in part from her scholarly interest in memorialization. Central to the excerpt she shared are questions of whose stories are remembered and passed on and whose are obscured or never told.

Silverman, who grew up in New York City, recently received a UI Writers Room Fellowship that will allow her to work on a television pilot. She graduates in a few weeks. Mazel tov, Emma!

Stars and Stones will be performed twice on the evening of May 5. For tickets and more information about the New Play Festival, visit https://theatre.uiowa.edu/iowa-new-play-festival-schedule-2022.