The City We Make Together — New book explores civic engagement

You walk into a space for a performance—not a theater, per se, but a gym or a ballroom—and find two rows of chairs with an aisle down the middle. Up front, a long table is set with name tags, microphones, and a folder in front of each space. Cameras are trained on the table, and large monitors on either side of the room broadcast what they capture along with captions. A microphone is positioned toward the front of what could be called the audience side of the room, while an American flag is posted behind the table. 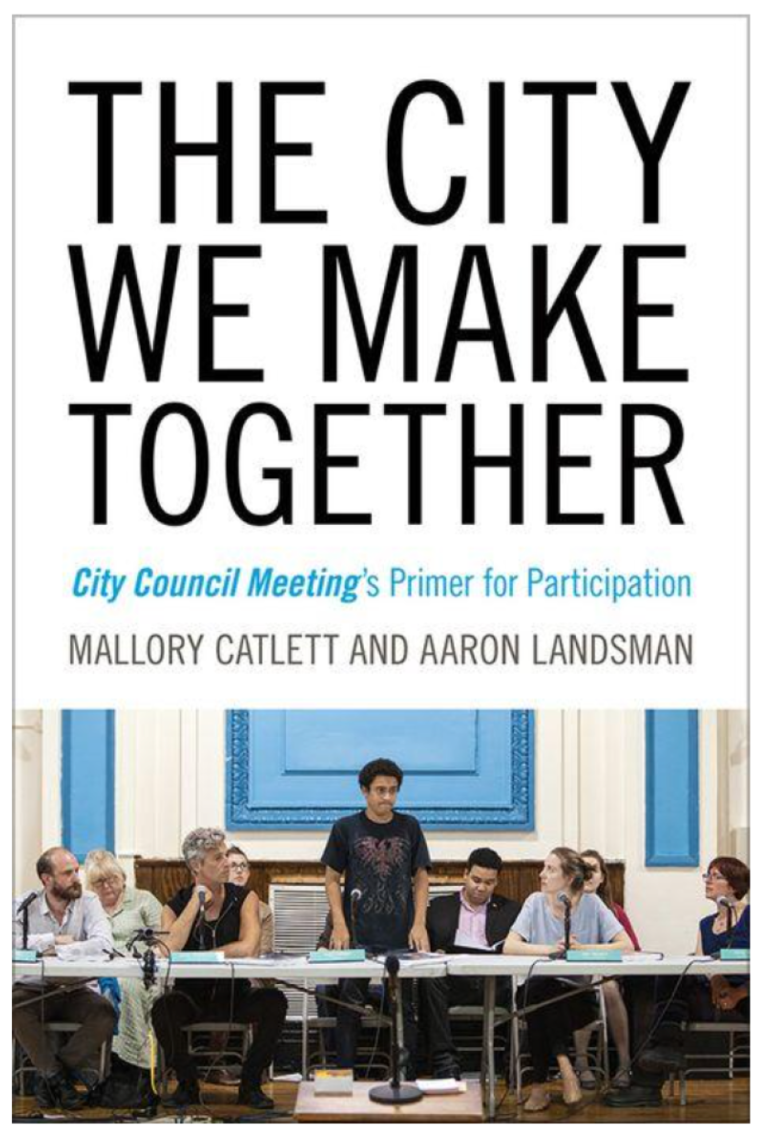 This is the set of City Council Meeting, a performance that occurred in five U.S. cities (Houston, San Francisco, New York City, Keene, and Tempe) in the mid-aughts. It is the focus of a new book, The City We Make Together: City Council Meeting’s Primer for Participation in the Humanities and Public Life series, a collaboration between the Obermann Center and the University of Iowa Press. Written by two of the core theater makers behind the piece, Mallory Catlett and Aaron Landsman, the book also serves as a prelude and additional tool for a curriculum that is being created as an extension of the production.

Essentially, this was a play

The show came about nearly by accident. Landsman, who calls himself a “text-maker, performance enabler, and teacher,” got roped into attending a city council meeting in Portland, Oregon. He assumed the event would be dull, but as his practiced eye took in the setting—audience on one side, those in the spotlight facing them at a slight elevation, people in attendance with prepared and practiced remarks—he realized he was in a very familiar milieu. Essentially, this was a play. And the room was basically a theater.

Landsman became more excited about the relationship between dramatic spaces and city council meetings when a man named Pete Colt came to the microphone to talk about his neighborhood. He was, recalls Landsman, “trustworthy but just this side of normal. Everything he wore was a different shade of brown or beige. He brought a briefcase. The beginning of his speech, with his avuncular tone and manner, was clearly practiced, though he didn’t read from a script. There was something slightly unsettling in how well he played his role. It was a little like Mr. Smith Goes to Washington meets the-guy-on-your-block-you-wave-to-but-cross-the-street-to-avoid.”

Colt was there to talk about the issue of garbage in his neighborhood, which is officially deemed the “Kids' Zone.” Despite this moniker, council members might not want to live in this neighborhood, Colt said, before dramatically opening his briefcase and dumping its contents. Heroin pipes, used condoms, a dirty diaper, crack vials, and other refuse were strewn across the table just in front of the councilors. A buzzer indicated that Colt had run out his two minutes, but he continued to speak until a council member cut him off by saying that they now had a public health issue since Colt had exposed the room to hazardous materials.

In their writing, Catlett and Landsman capture Colt’s reaction: “[He] didn’t miss a beat. He turned with a flourish to face the crowd. ‘Thank you for agreeing with me. Thank you for making my point even better than I ever could. Thank you for saying exactly what it is. The question is, how are we gonna help these kids?’”

The moment underlined to Landsman the theatrical qualities of a city council meeting as well as the fine line between those qualified to lead and those being led, between those sitting at the table and those, like Colt, who bring their grievances to the public forum.

Soon after attending the meeting, Landsman was inspired by the contemporary French philosopher Jacques Rancière’s interpretation of Plato and the latter’s notion that no one is better suited to lead than anyone else. Landsman began attending city council meetings in other communities and transcribing specific moments. He read The Presentation of Self in Everyday Life by Canadian sociologist Erving Goffman, who used the language of dramaturgy to explore presentations of the self in political settings. And he delved deeper into Rancière, who “situate[s] our questions about democratic participation in relation to participatory live performance.”

In a recent conversation with us, Landsman said, “What I love about a council meeting and Rancière is that it bursts open the neo-liberalist notion that we’ve got to find a common meeting point and get along. No! There’s an arena that can house all these complaints and allow us to not become ‘one’ but be our individual selves.”

Choose your own adventure

As you might detect from their influences, the book that Landsman and Catlett have written appeals to multiple audiences. There are those who are interested in the workings of democracy and civil society who might find theater an unlikely but exciting vehicle for questioning who participates in our civic processes. Another audience are creative makers interested in the relationship between those on a stage and those observing. No matter what brings you to this book, you'll find plenty of resources to explore, from philosophy and sociology, to artists like Joseph Beuys and Augusto Boal.

In this regard, it’s a bit like a “choose your own adventure” text, so that if you’re a reader with a decided preference toward one of these lenses, you can move more quickly through certain parts of the text and drill down into others. The book is a roadmap of the authors’ process, complete with the final script as an appendix. It is very open source in spirit, and like many open-source things, it was created to be permeable and changeable. Landsman and Catlett are clear that their approach to City Council Meeting morphed over time, and they want others to use the book as a loose template.

From the get-go, they emphasize that City Council Meeting is not one of those pieces of theater in which the audience shows up and is cajoled into participating alongside actors who are rehearsed and "in the know." Rather, as people arrive, they are given options for roles they can play—councilors, speakers, supporters, and bystanders. “We tried to put them at ease,” the authors write, “focusing on clear communication with the audience through task- and text-based instructions rather than theatrical pressure to represent character and situation.” 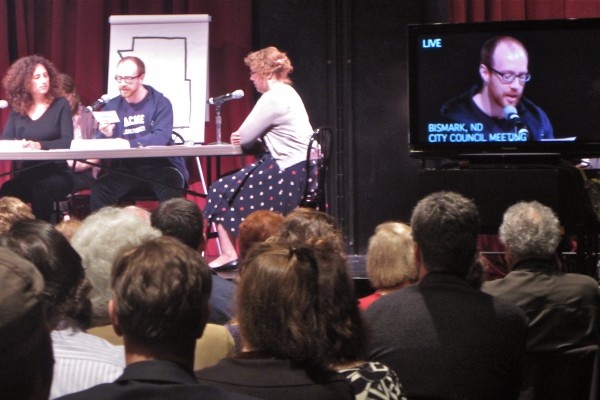 Each council member joins the long table at the front of the room where they have a folder that contains their dialogue and any letters, data, or other information that will be referenced in the production. They are also assigned a staff member, a person (not an actor) who has been trained in advance by Landsman and Catlett and their core team. Staffers, who carry clipboards with instructions to read to their councilor, serve almost like stage directors but for a single person.

The text comes largely from actual meetings Landsman and Catlett transcribed, including Colt’s testimony. They are clear, however, that no one is intended to embody the person whose dialogue they are presenting. A middle-school kid can read the words of an elderly speaker; a Black man can read the words of an Asian female councilor. No acting is expected or encouraged. In fact, improv is disallowed.

“Engagement is a human interaction with the world,” says Catlett. “We were drawing out in this piece the sense that you can choose to participate. … Why do we go to a city council meeting or not? When we’re there, what are the judgements running through our heads? Do we think we’re smarter than everyone else? We’re trying to tap that panoply of feelings running through the audience.”

Following an intermission, each production of City Council Meeting culminated with a specially written “local ending” that was specific to an issue faced in that community. In Houston, for example, Catlett and Landsman focused on a confusing infrastructure plan intended to address the city’s lack of preparedness for rising sea levels and increased rain. This plan has been represented as unfairly taxing public and nonprofit entities and was thus opposed by the schools and some churches. To present this section, Catlett and Landsman worked with local middle-school students, a gospel choir, and the actual city council member behind the proposal. “[The local ending] allows us to focus on one pressing issue and tease out the inherent complexity and theatricality of it.” It is also a moment when the audience is reminded of the current aliveness of what they are participating in. Gone are the staffers with their clipboards and the cameras that broadcast a cable vision blandness on side screens. The “set” of the meeting is gone, replaced by actual members of the community grappling with an issue that could affect everyone in the room.

Landsman is currently teaching a Freshman Seminar at Princeton University that uses City Council Meeting as its template. Students attend council meetings and transcribe sections. They read work about theater and sociology, and in lieu of a final paper or exam, they create their own “local ending.”

The curriculum he and Catlett are developing with help of a Princeton entrepreneurial initiative will be applicable to a wide range of student ages and course disciplines. Landsman hopes City Council Meeting, whether in a classroom or a community performance state, will get people to engage: “We don’t want you to have a cathartic sense of speaking truth to power but rather knowing what it’s really like, so you can go to more meetings and speak up.”

Learn more about Aaron Landsman at http://www.thinaar.com/ and Mallory Catlett at https://mallorycatlett.net/.  Follow the project at http://www.citycouncilmeeting.org/. The Humanities and Public Life book series can be found at https://humanitiesandpubliclife.uiowa.edu/.